Where to spend my final two nights? Instead of the original plan of driving up to Banja Luka, I decided that night in Jajce to seek out another big waterfall instead, the Štrbački buk in Una National Park near Bihać. Then maybe I’d spend that night in Bihać. Or near Plitvice Lakes. Or maybe I could make it up to Banja Luka after all? I figured I’d drive and see how the next day went and wind up where I wound up. For the final night, I figured I’d probably stay in Samobor, a town near Zagreb.

Part of the appeal of driving up to Banja Luka was supposed to be the drive up, so I did part of the drive – yes, it was very scenic, overlooking the Vrbas River 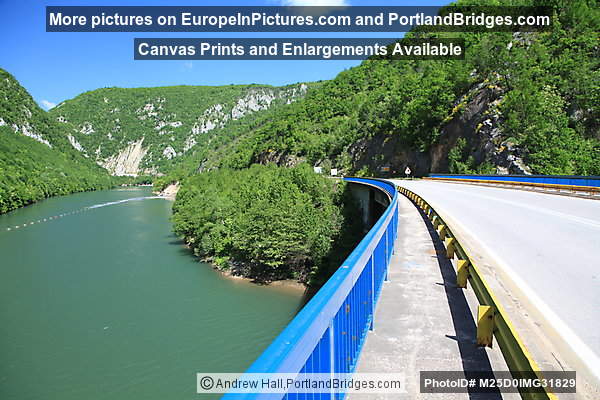 Driving from Jajce to Banja Luka via M16 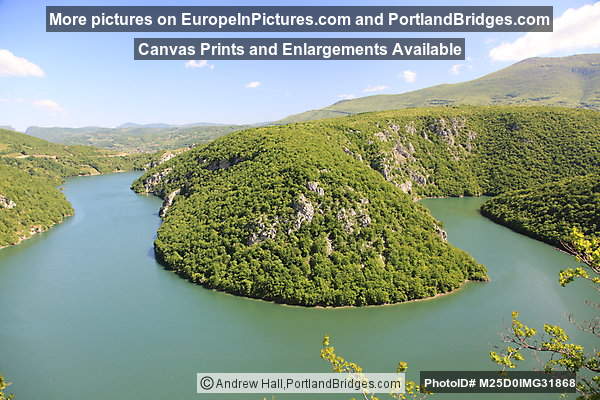 Vrbas River, Driving from Jajce to Banja Luka via M16 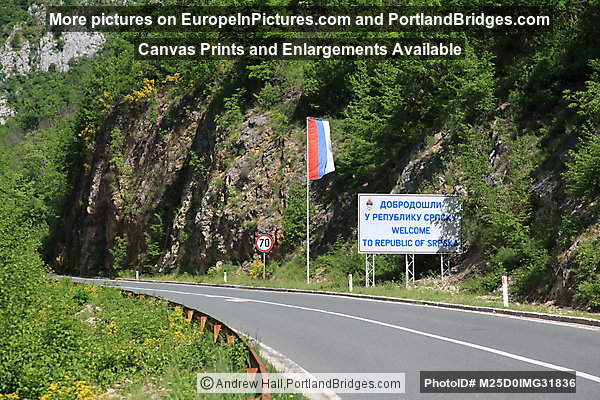 then I doubled back and headed toward Bihać.

I didn’t exactly know how to get to Una National Park, which is a relatively new “park.” The Una River, which runs from Bihać through the park, so I figured the park wouldn’t be that hard to find. Surely my GPS would have no clue how to find this new park. I imagined I could drive toward Bihać and look for signs.

And I found those signs, eventually, but I didn’t drive far enough Bihać. I tried to detour through a narrow country road shown on a Google Map that turned out to go nowhere, so I had to backtrack, wasting about an hour. But I did see some interesting views, anyway. 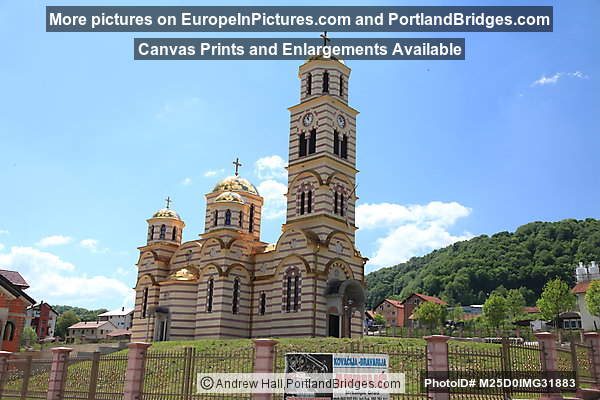 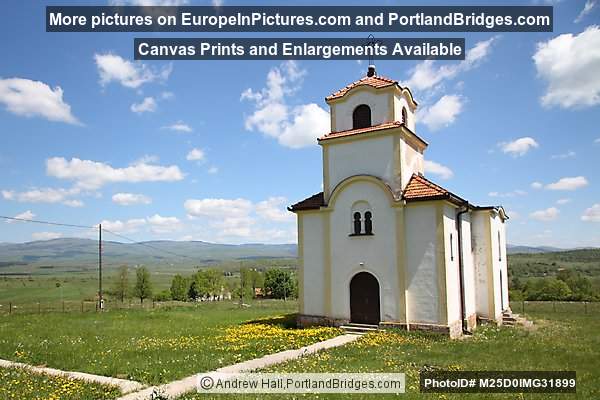 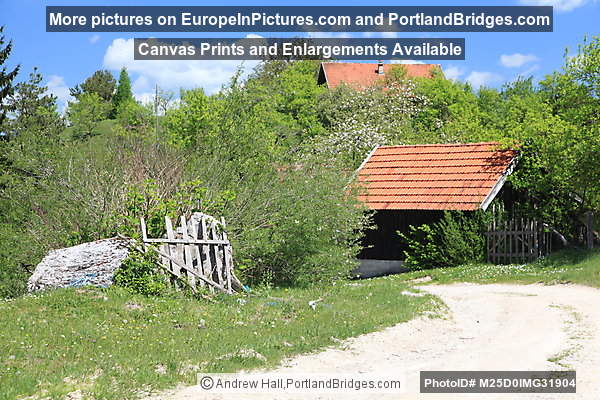 Finally I saw signs to enter Una National Park and followed them for a while.

One park entrance had signs directing visitors to Štrbački buk. Once I entered the park there, I found myself on a narrow one lane unpaved road driving for about 8 kilometers. 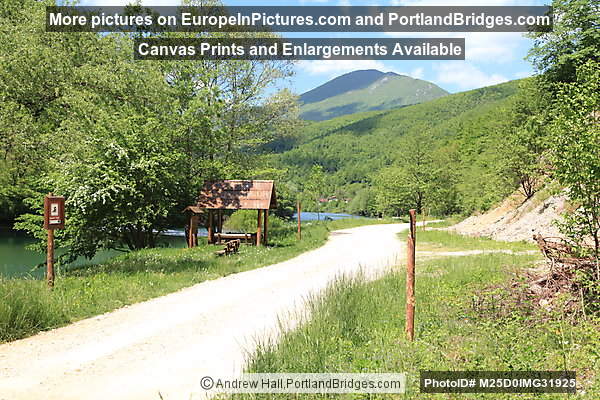 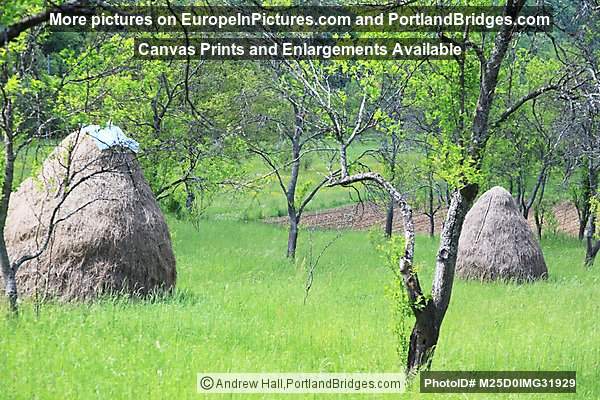 It wasn’t busy on the road; when the rare car came the other way, each car simply made way on the sides to allow the other to pass. This was quite a contrast to the well-developed Croatian parks I had visited.

Finally I got to an official park gate manned by a person and paid a small entrance fee, then drove another two kilometers to a parking area for Štrbački buk. The parking and viewing area for the falls was well developed, with a wooden walkway, steps, railings, etc. Getting there was a little bumpy, though! 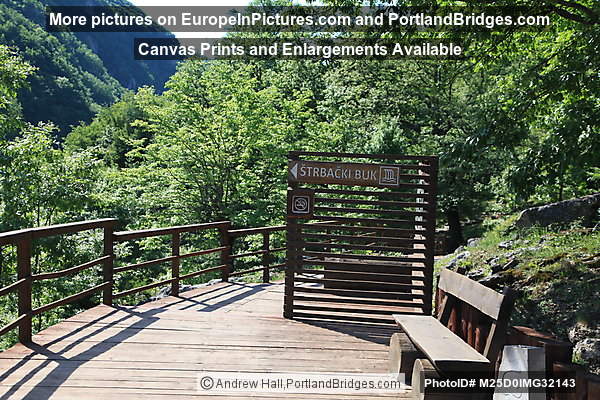 I had seen some impressive waterfalls in Bosnia and Croatia, but Štrbački buk was the first one that took my breath away. The thing was massive and loud – and amazing. 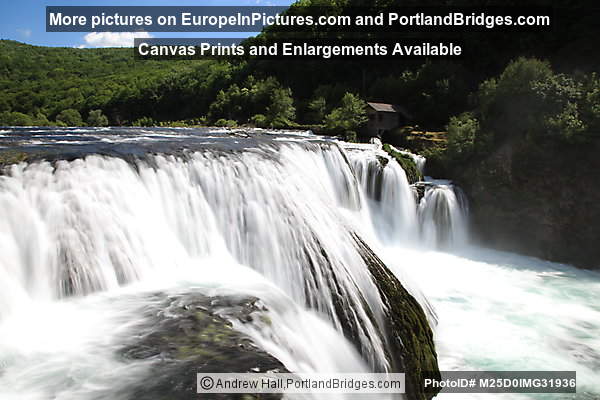 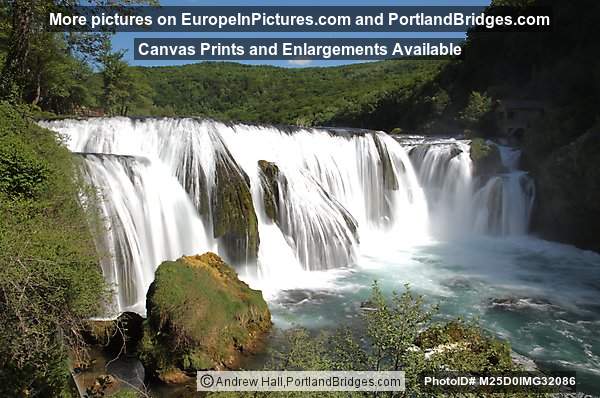 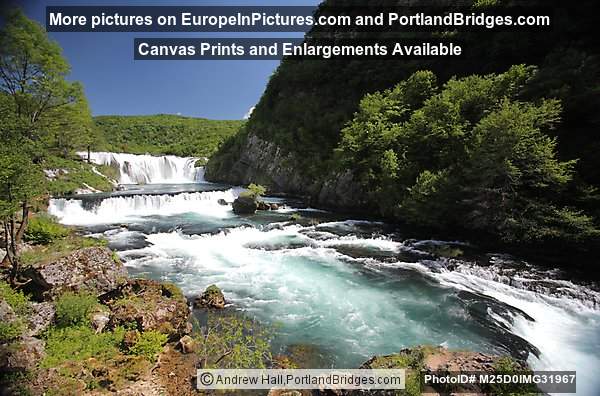 I struggled to find the best spot to photograph it without getting all wet or getting water all over my camera lens. Eventually I walked down a ways below the falls.

Here I ran into a group of guys who saw me with my camera and got all excited – they waved and gestured to me. They looked like a group of Muslims having a prayer meeting or something. They seemed to want me to join them, but I smiled and politely continued on, taking pictures. A few minutes later, one of them came down to show me a picture he’d taken of me on his camera, showing me stooped over my camera and tripod. He seemed to want my approval – was it OK that he had taken my picture? I said sure, why not? Then I realized who these guys were: they were the same guys I’d seen the night before at the Pliva Watermiills in Jajce! They had driven a few hundred kilometers, too, to arrive at the same park. So that’s why they so were excited to see me.

I talked to them some more – a few of them spoke some English. They were from Kuwait – just tourists like me. They asked if I would take a group picture of them, but all of their group weren’t there at one time. Some were out wandering around. Then they said they didn’t have time – it was time to pray, so I said my goodbyes and headed back to my car. By the time I was leaving, they were back in their van ready to leave, too, but their car had battery died. One of them asked me if I had jumper cables in my rental car, but of course, I didn’t. At least they gave me an interesting story!

On to Bihac – and sleep where?

After leaving Una National Park – which was quite time consuming, given the long bumpy drive in – I made my way to the town of Bihac, which is close to the Croatian border near Plitvice Lakes National Park. I wondered if Bihac might be an interesting town? A bartender I’d met in Sarajevo said he was from Bihac – and I’d read a few things about it, but I didn’t know much else. So I parked my car and decided to check it out. The center of town is tiny – looks like a university town- and seemed like nothing special, so I quickly decided not to stay a night there. 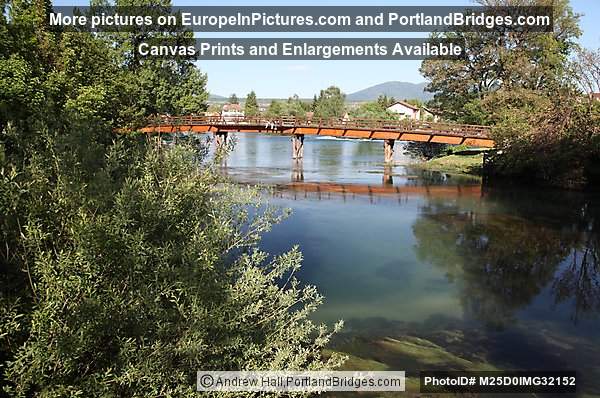 If not Bihac, where then? Banja Luka was too far – probably 2-3 hours north, and it was getting dark.

What about Plitvice Lakes? I had been there in 2009 and loved it – but why bother seeing it again? Then again, why not? My one regret about my 2009 visit was that I thought I didn’t take very nice pictures – couldn’t I do better? And I was now so close…

So I sat in a park in Bihac and used my phone’s Bosnian SIM card as a (slow) WiFi Hotspot, hopped on Booking.com, and looked for cheap lodgings near Plitvice. I found a place that was cheap and not to far from the park and struggled to book it with the slow internet connection. Type in the credit card number…almost there….almost there. Finally I booked the place, noted the address, and figured I would be able to find it pretty easily.

Then I picked up some take-away food for dinner from a fast food place in town, some chicken fingers at a place that probably caters to university students. I drove out of town and spent my remaining BAM currency putting gas in car (plus gas is cheaper in Bosnia than in Croatia).

Then I drove to the Croatian border, which took only about five minutes to pass through.