Leaving Sarajevo, I had three nights remaining before flying from Zagreb back to Amsterdam. I expected to spend one night in the Bosnian town of Jajce. Where to spend the last two nights? The city of Banja Luka was on the driving route from Jajce to Zagreb – I had originally planned to spend the final night there and drive to the Zagreb airport the next morning. But I was sort a day ahead. I didn’t feel like spending two nights in Bosnia between Sarajevo and Zagreb.

Travnik seemed like day stop on the way to Jajce, not an overnight. I considered staying over in Bihac near the Croatian border or even a return to Plitvice Lakes National Park.

I even flirted with the idea of booking a cheap easyJet flight to Amsterdam out of Split instead of Zagreb and spending the last two nights back on the Dalmatian Coast, just to get some final time by the sea. But that would have required a lot of driving all the way back to where I’d just been. In the end, I decided to stick to my original direction and head for Jacje, with a stop in Travnik.

I saw lots of minarets sticking up from mosques as I drove toward Travnik and the road signs were mostly in the Roman alphabet – clearly I was still in the Federation of Bosnia and Herzegovina, which is the “Muslim/Croat” part of Bosnia, a leftover government structure from the 1995 Dayton Peace Accords that ended the Bosnian War. Technically, the nation called “Bosnia and Herzegovina” contains two separate states: the Federation mentioned above and the Republic of Srpska, the “Serbian” part of the country. The two entities have separate governments, but there is no straight line dividing one from the other; instead, the Republic is made up of two sections in the northwest and east of Bosnia while the Federation is made up of the southwest part of the country with a big section poking up to Sarajevo. These boundaries mostly reflect the territory held by the Serbs and the Croats/Muslims at the end of the war in 1995. When you drive into the Republic, there is no border crossing but you do see signs announcing that you have entered the Republic of Srpska –you start seeing Serbian Orthodox churches instead of mosques, and road signs are in Cyrillic as well as (usually) Roman.

I arrived in Travnik soon enough – there wasn’t much traffic on the roads on a Sunday. I saw a number of what I believe were Turkish tourists in the town. Travnik was the last Ottoman capitol of Bosnia, so the place has some historical significance to them, I guess. The ruins of the old Ottoman fortress still exist above the town, and you can tour it. I wound up parking at the base of the hill above the fortress near the Plava Voda, a pleasant stream with a few cafes and a modest shops on either side. 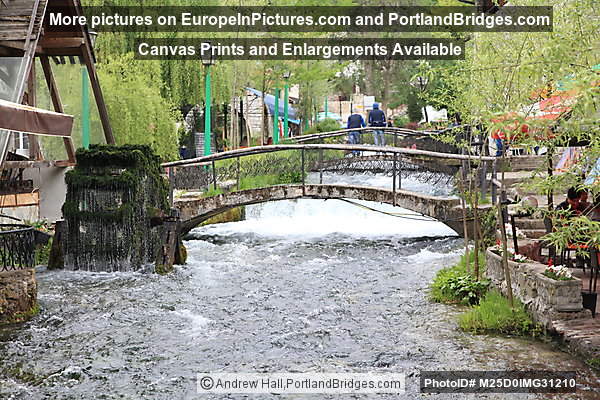 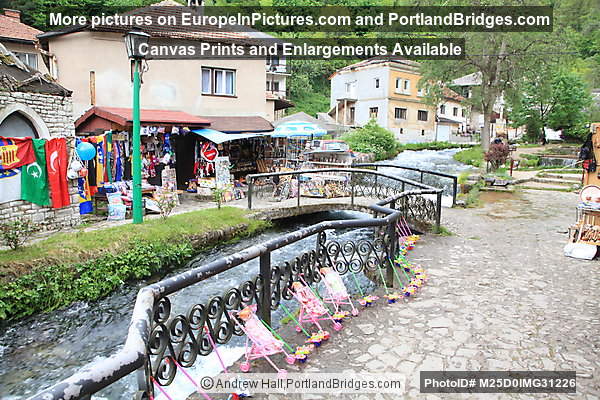 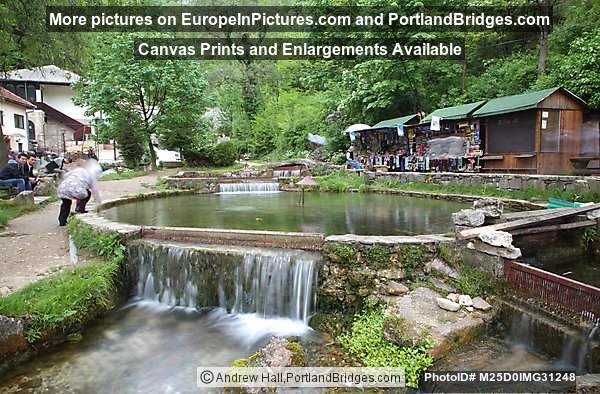 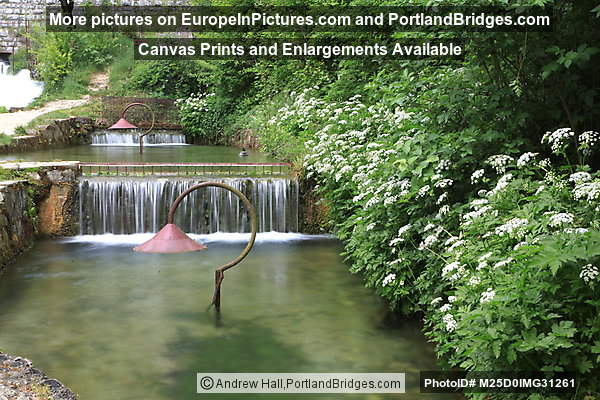 After exploring the Plava Voda a bit, I hiked up to the fortress. (there’s a small entrance fee.) As far as wrecked old fortresses go…this one was great, I guess. 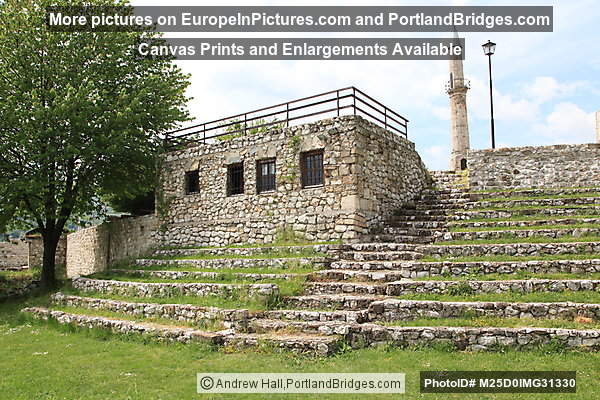 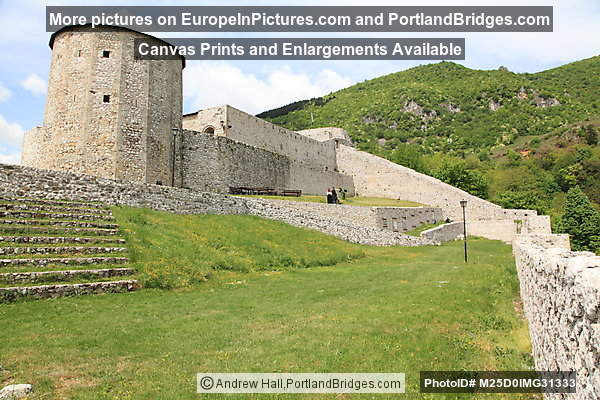 For some reason, this stuff doesn’t impress me much any more. The views from the fortress down on Travnik and the surrounding hills are terrific, though. 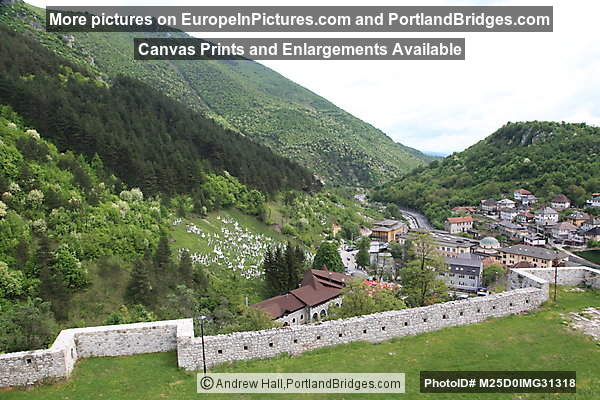 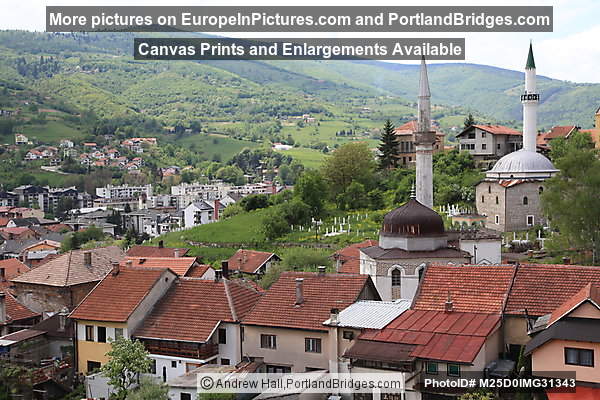 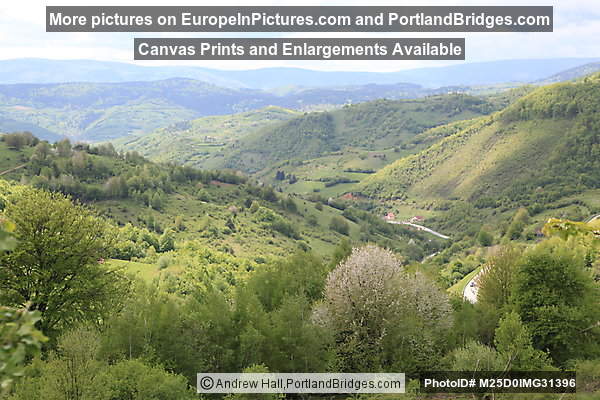 View from road between Travnik and Jajce 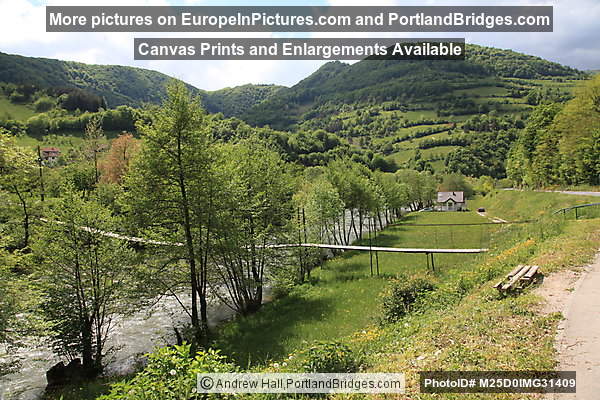 View from road between Travnik and Jajce

After Travnik I headed on to Jajce. The scenery along the E661 / M16 highways was gorgeous, with rolling green hills in every direction. One thing you can say about Bosnia and Herzegovina: it’s full of beautiful countryside.

View 38 Photos of Travnik on PortlandBridges.com