The direct Delta flight from Portland to Amsterdam was awesome – about ten hours, on time, only about half full. I had a whole row of four seats to myself, plus AC power! I still couldn’t sleep a wink, even though I tried to lay down on the four seats, first time ever!

My connecting KLM flight from Amsterdam to Venice departed about two hours later. I had about ten Euros with me, but I used the airport ATM in Venice to get more Euros.  I had been to Venice three times in the past – I didn’t feel the need to go again now. 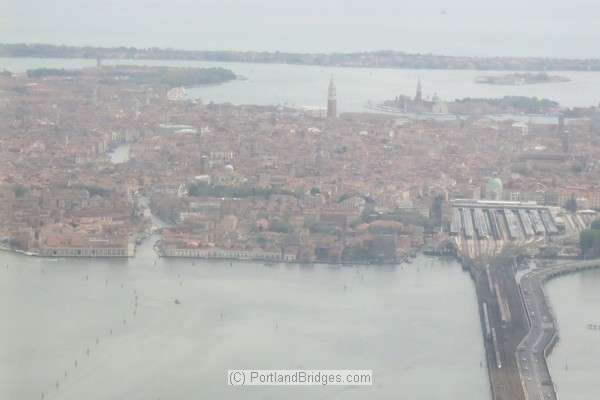 Venice, view from the plane

From Venice Marco Polo Airport, I expected to take a shuttle directly to Ljubljana using a Slovenian company called DRD that I had used before. Last time, I took a DRD bus – a “real” bus that said “DRD” on the side – from Mestre to Ljubljana. This time, the “bus” was just a guy with an unmarked van and a little paper that said “DRD.” And he didn’t even drive into bus/shuttle pick-up area where I was waiting outside the airport – he simply wandered over on foot with a “DRD” sign and asked if we were waiting for DRD? I wasn’t the only one waiting for DRD – I had been chatting with two Aussie tourists who were taking it to Ljubljana, too. They had pre-booked tickets. I didn’t have a ticket – I had emailed DRD ahead of time and they emailed me back only a few hours prior to departure saying they had an empty seat. I was able to pay in Ljubljana in cash, in Euros.

The loose nature of DRD’s operation was a bit disconcerting, though. I’ve heard recent accounts of DRD not even showing up at the scheduled departure times. If you use them, remember that they aren’t a conventional bus service – you can’t simply show up at a bus stop at the scheduled time shown on DRD’s website and hope to hop on the bus and go. If they aren’t expecting you, they may not even come by at all. You HAVE to contact them ahead of time, either by email or by calling them– or by buying tickets on their website, if you can. I’m not sure I would use DRD again, though – maybe next time I’ll try GoOpti, a rival shuttle service that seems well regarded by Slovenes.

The DRD van ride to Ljubljana was OK, though. It started to rain as we drove – then it started to rain so hard we could barely see out the van windows. Great way to start my trip! I always obsess over the weather and fear lots of rain, having been plagued by it on a few trips. But, what can you do? We got to Ljubljana faster than I expected, despite the rain.