As I drove north from Montenegro late in the afternoon, I didn’t know which town I’d sleep in that night. I guessed I’d drive as far as I could that evening and stop in either Mostar or Trebinje. I was planning to stop in Blagaj near Mostar either way, but I had visited Mostar before. It’s a nice town but I didn’t feel a need to return – not even as compelling as my return to Dubrovnik.

The town of Trebinje was on my radar because it looked to be off the tourist trail – maybe a nice, undisturbed town, a contrast to the ultra-touristy Dubrovnik nearby. And it has a beautiful old stone bridge. Had I not already been to Mostar in 2009, I most certainly would have stopped there instead.

Driving from Montenegro, I eventually made it into Trebinje not too long before sunset. I found the old Arslanagić Bridge (stone bridge) fairly easily, and I found it while there was some great golden hour light on it. 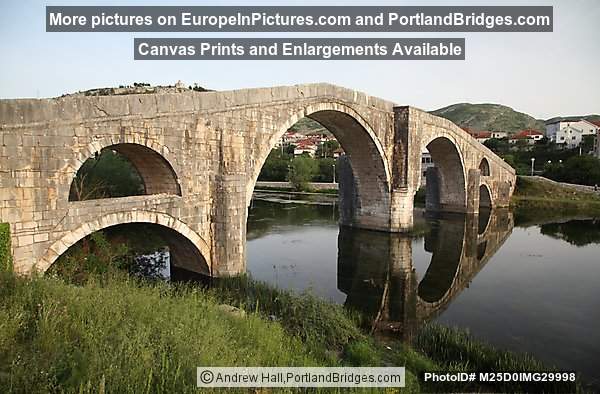 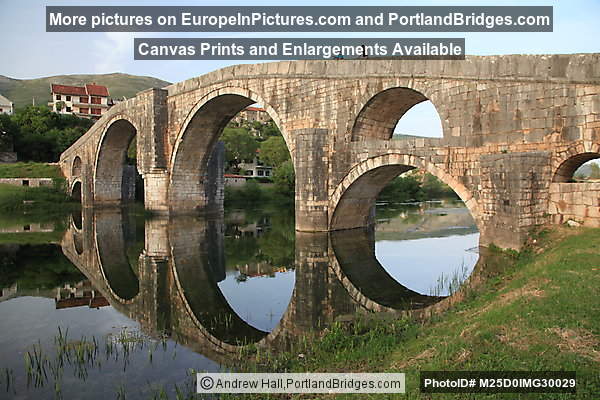 This bridge was originally further from town, but during the Yugoslav years the river was dammed and the bridge flooded; eventually is was dismantled, put aside, then moved and carefully re-assembled in its present location. It seems that moving old bridges is fairly common in Europe; I encountered a similar old bridge like that in the Czech Republic.

One thing that struck me as I drove around Trebinje was how much less prosperous the town seemed than any I’d seen in Croatia or even Montenegro. It seemed like a fairly poor town, even though, supposedly, it has been one of the more prosperous towns in the country. The neighborhood the area near the bridge seemed run down and a bit sketchy,, almost to the point where I worried about parking my car and walking too far away from it. (But I did and it was fine.)

Along the Trebišnjica river, as the sun went down and I took my pictures, the frogs in the river made a lot of noise – almost deafening. It was actually pretty cool. 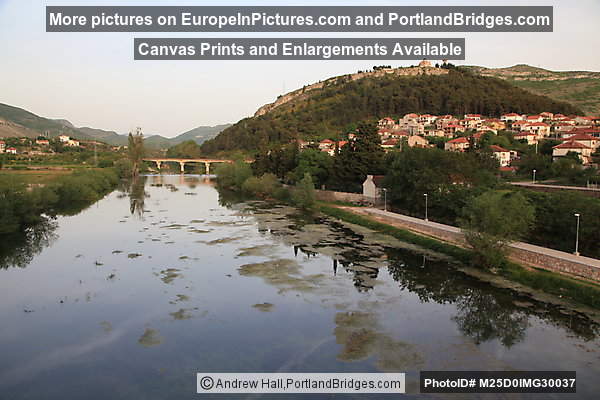 After taking my pictures, it was almost dark and now a foregone conclusion I’d spend the night in Trebinje instead of driving a few more hours in the dark on to Mostar.

I had a list of possible Trebinje hotels written down (and I knew the town wasn’t busy – travel websites showed that hotels in Trebinje were available and cheap). I typed one of hotel names, the Hotel Platani, into my Garmin GPS and let it guide me to the hotel’s parking lot. I thought this hotel was in the old town, but I was so disoriented that I wasn’t sure which side of the river the old town was on. I parked my car and inquired about rates at the front desk. The price was pretty cheap (maybe 30 Euros/night), the room looked OK, so I checked in.

When I got the room key, I noticed it said “Hotel Leotar.” I was at the wrong hotel, on the opposite side of the river!!! (Thanks, Garmin!) But at that point I was too tired to care – how bad could it be? The price was right. And the hotel was along the river, with the old town right across the bridge. 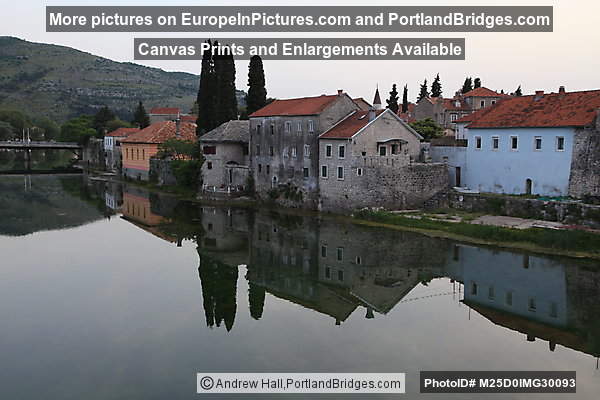 Trebinje along the river, building reflections

The Leotar, it turns out, is pretty well regarded and kind of a landmark, an old hotel with a long reputation in Trebinje, but it looked like something ugly out of the Yugoslav era. The hotel was OK but unfortunately, the WiFi was terrible – by far the worst of any place I stayed on my trip, bad even compared to the modest B&Bs and guest houses I’d stayed at. WiFi didn’t work in my room at all at the Leotar. It worked in the lobby but was still very slow. Ironically, I found the Leotar’s WiFi worked sitting on a wall across the street from the hotel along the river, as I ate some dinner – but not inside my room!!! I needed internet to keep in touch as I traveled, and on this night I had some business that required a good internet connection. Naturally, on the one night I needed it the most on this trip, I had the worst WiFi!!!

I walked into the old town, found some pizza slices to eat for dinner, then walked back to the Leotar and crashed. The next morning, I did a proper walk around the old town – a pleasant place with wide avenues, a nice town square, restaurants with outdoor seating, etc. 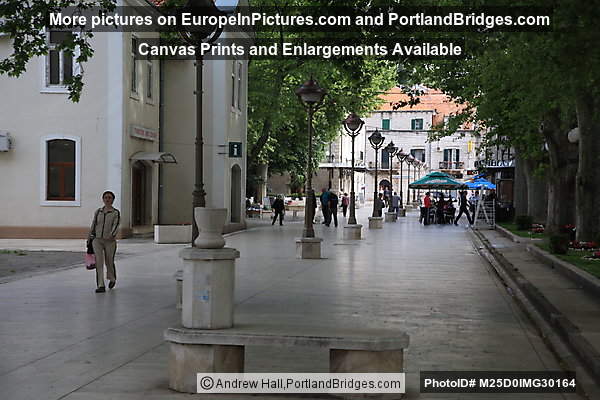 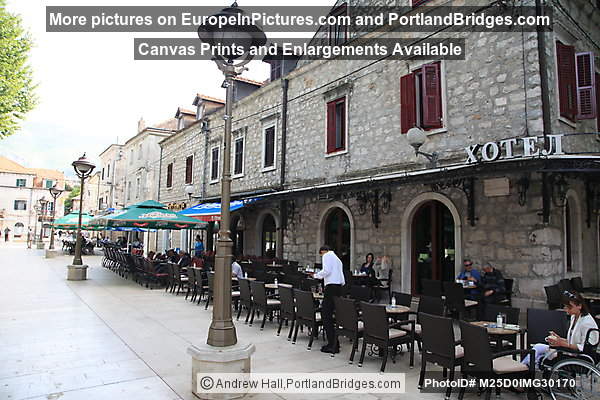 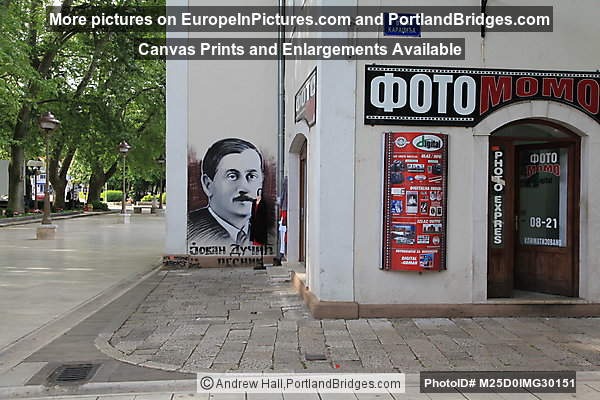 It wasn’t busy at all the evening or morning I was there but I could imagine this town being full of people at busier times. I bought a cheap SIM card from a no-name mobile store, kind of got it work, then went back to the Leotar and checked out.

Before leaving Trebinje, I took some more pictures. Right across the street from my hotel, the river is calm and there were gorgeous reflections of the buildings into the water. 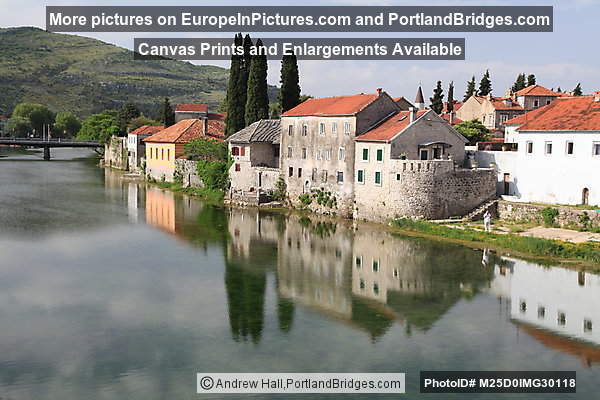 I also drove up Crkvina Hill to the Hercegovačka Gračanica monastery, a beautiful (relatively new) Serbian Orthodox monastery with an incredible view down on the river valley and Trebinje. 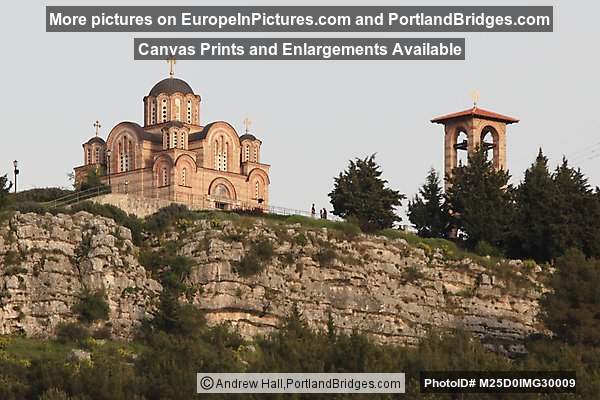 Unfortunately, by now the sun that had been out earlier had gone away bringing clouds and threatening rain. The views from this hill are fantastic in the morning, though. 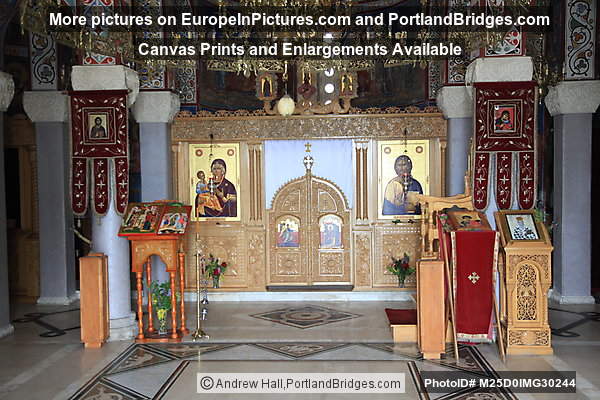 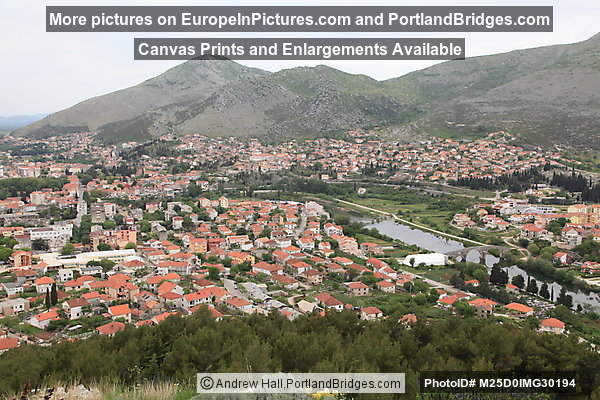 Trebinje is a nice town – but it’s not the kind of place that seems especially charming at night (at least not while I was there). It would make a nice day trip, and it’s close to Dubrovnik.