Train to Rijeka and Rental Car

I bought my train ticket to Rijeka at the Ljubljana train station a few hours before it departed. It wasn’t reserved, all second class, so it couldn’t sell out, and there was no discount for purchasing in advance (and therefore, no need to). The agents at the train station spoke English.

The train from Ljubljana to Rijeka (duration of about 2:45) was about what I expected – a clean, modest commuter train. 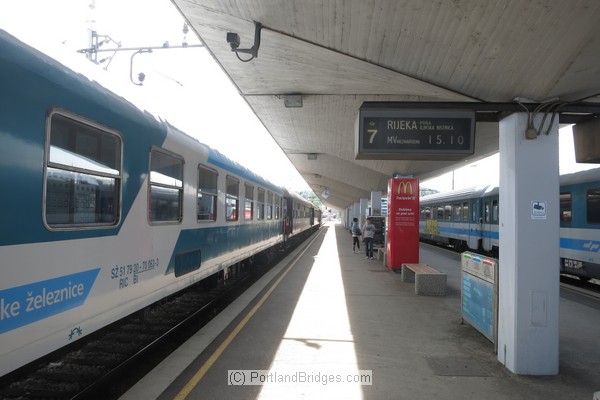 Waiting for train to Rijeka at Ljubljana Train Station 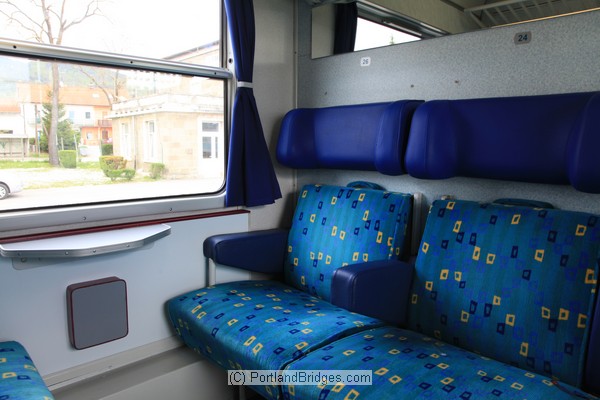 Seats were not reserved, and the train wasn’t even half full as far as I could tell. I sat in a compartment with one other person who got off just before we crossed the Croatian border (which still requires passport checks as of April 2015; even though Croatia is now in the EU, it is not yet in the Schengen area). Some of the scenery from the train was beautiful but not unbelievable. You get a nice view of the Kvarner Gulf and Rijeka as the train approaches, though. The train windows opened so I could shoot some pictures out the window. 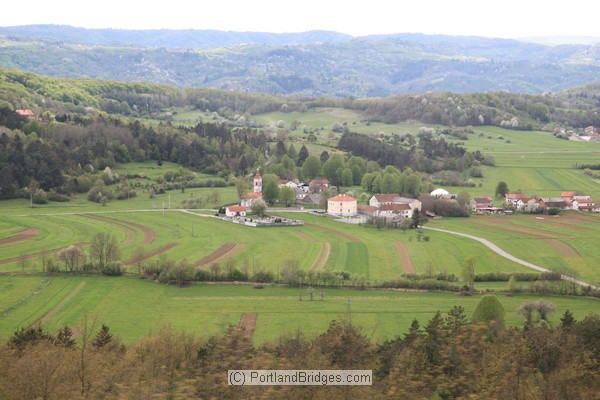 Slovenian countryside from the train 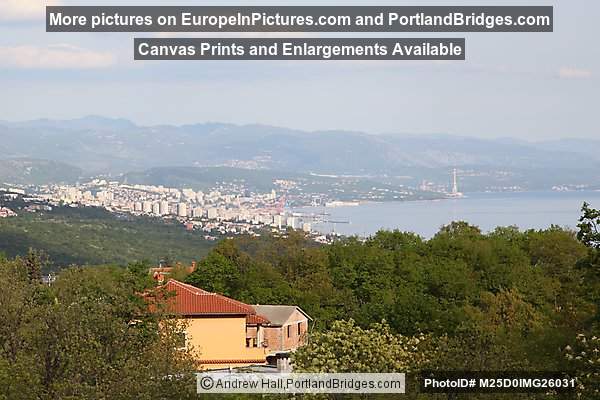 Kvarner Gulf, Rijeka, from the train

I rented my car from a company called Oryx (booked via EconomyCarRentals), which operates in cities all over Croatia and has a pick-up office down by the ferry terminal in Rijeka. It’s a bit of a walk from the Rijeka train station down to the Oryx office – took me about 20 minutes. I didn’t have lots of luggage, and I am used to dragging my bags this far (at least it was downhill and in good weather). I suppose the average person might have taken a taxi or a bus part way, but I didn’t mind the walk. It also gave me a chance to explore the edge of Rijeka as I walked. I felt a tinge of regret about not spending any time in Rijeka beyond picking up a car there – not that it appeared to be a pretty town, but it was a tad intriguing, some of the buildings were interesting, and the water by the port sparkled on this warm afternoon. 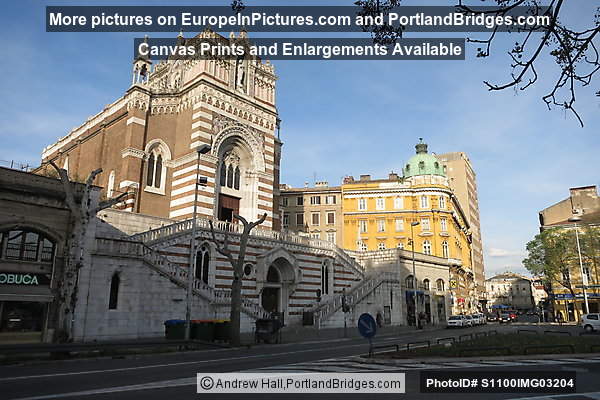 Capuchin Church of Our Lady of Lourdes, Rijeka 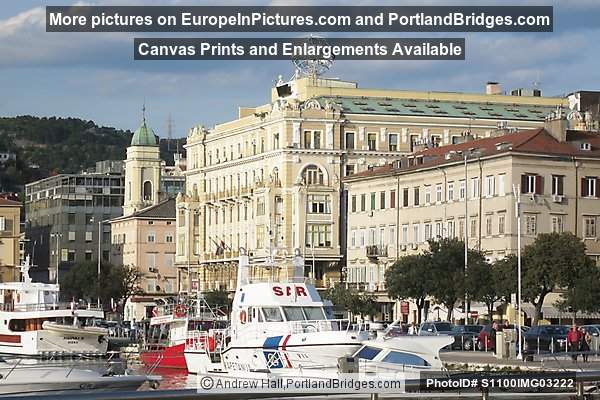 Picking up the car from Oryx in Rijeka was easy after the walk from the train station and took only about 15 minutes (dropping it in Zagreb two weeks later was another story – see below). So I plugged in the Garmin GPS I had brought with me and headed for Rovinj. I made a few wrong turns as I left Rijeka, even with the GPS, as I kind of got my bearings a bit, but driving out of Rijeka was relatively easy; soon I was on the right road heading toward Rovinj. There was almost no traffic at 7PM.

A note on renting cars in Croatia: Some international rental car companies seem to have restrictions on driving their cars into Bosnia and Montenegro. But smaller, local companies like Oryx and Fleet do allow it, for an extra fee. Oryx charged 31 Euros plus 25% VAT to drive outside the EU – not included in my EconomyCarRentals price even though I had requested a free “cross border card.” Fleet charged 5 Euros per day – capped at ten days – when I checked with them. Some companies may make distinctions about driving the car out of the EU – Croatia is in the EU now, but Bosnia and Montenegro are not. Driving a car from Croatia to Slovenia (in the EU) may be allowed without an extra fee. FYI, if you drive south from Split to Dubrovnik, you ARE driving through a tiny section of Bosnia – the “Neum Corridor” – as you drive south, so you have to consider the cross border issue there. You could skip the Neum corridor by taking a ferry, I guess (would add an hour or two to your drive time). Some car companies make an exception for driving in the Neum Corridor, as obviously many tourists drive their rental cars to Dubrovnik. Check with each each individual car company about their car rental policies – they all seem to be different.

Also, renting a car in one country and dropping it in another usually incurs a steep drop-off charge. If you are starting off in Slovenia as I was, it’s generally easier to find a way to get to Croatia to pick up your car there (and drop it in Croatia too when you’re done) – hence the train from Slovenia to Rijeka. If you are considering how to plan a trip between Ljubljana and Rovinj using public transportation to pick up a car in Croatia, you might consider this option that I used then; direct train from Ljubljana to Rijeka (twice a day), pick up a rental car, and drive to Rovinj. Another option I considered was taking a direct bus from Ljubljana to Rovinj, but the bus I looked at taking was over a four hour ride and left early the morning, whereas I preferred taking a train in the afternoon. (I don’t care for long bus rides – and love trains.) There is an Oryx office right in Rovinj, which is an option for picking up the car, if you don’t mind that long bus ride and/or the timing works better for you or something. And not having a car while you stay in Rovinj means you don’t have to worry about parking it – cars are not allowed inside Rovinj’s old town where you might prefer to stay. There are fewer car rental options right in Rovinj than in Rijeka – or Pula – however.