I had studied maps of Sarajevo, but once I got to town, even with my GPS I had trouble getting my orientation. I couldn’t even remember which side if the river the old town was on. I had booked the Hotel Latinski Most (Latin Bridge) which (adjacent to the bridge) should have been easy to find, but of course, my GPS had little info on landmarks in Bosnia. Finally, I parked my car in a lot close to the river (about 70 cents USD an hour) and walked around to try to get my bearings. 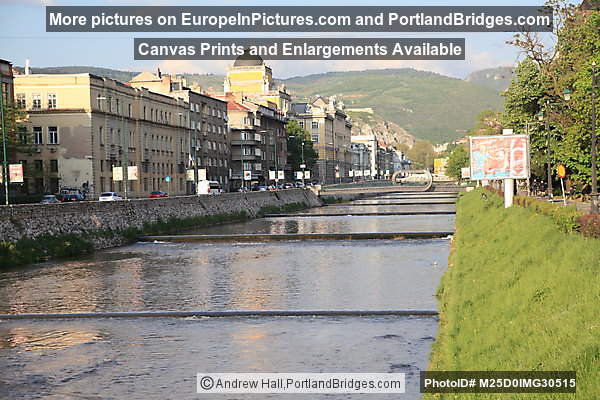 How hard could the Latin Bridge, Sarajevo’s most famous landmark, be to find? I popped into a Residence Inn and asked the English-speaking front desk person for directions, and soon enough I found my hotel.

I had been pushing pretty hard the last few days, lots of driving. I hadn’t spent two nights in the same town since Rovinj, a week ago! So I took the first night pretty easy and parked the car for a few days in Sarajevo. I did a quick walk around the old town Sarajevo, grabbed a quick dinner, then called it a night.

As you probably know, Sarajevo has a sad and complex history. I had prepared for my visit by reading and watching several items. I highly recommend The Trigger: Hunting the Assassin Who Brought the World to War by Tim Butcher, a fascinating book tracing the life of Gavrilo Princip through Austrian-occupied Bosnia and how he came to Sarajevo to take that fatal shot on June 28, 1914, that changed history. Butcher’s book also gives some insight into the more recent Bosnian war and modern life in the country.

I also watched several informative documentaries on YouTube: a great multi-part BBC documentary (produced in the 1990s) called “The Death of Yugoslavia” that covered the Bosnian War and also the whole conflict (prior to Kosovo in the late 1990s). It’s a long series to watch, but I enjoyed it. I also found a History Channel piece on the Canadian UN troops who were the first UN peace keepers to enter Sarajevo at the start of the seige. Finally, I watched a great Frontline (PBS) documentary – on YouTube at the time – called “Romeo and Juliet in Sarajevo.” This one covered the tragic death of a young couple – one Muslim, one Serbian – who were shot by snipers and died together on a bridge in Sarajevo. It also gave a lot of the human perspective on the war – about the people who lived through the war and the crazy choices they had to make just to survive. If you watch nothing else, watch the Frontline video.

On my first morning in Sarajevo, I set out to explore the old town properly, following a couple of Rick Steves walking tours as best I could and taking some pictures. 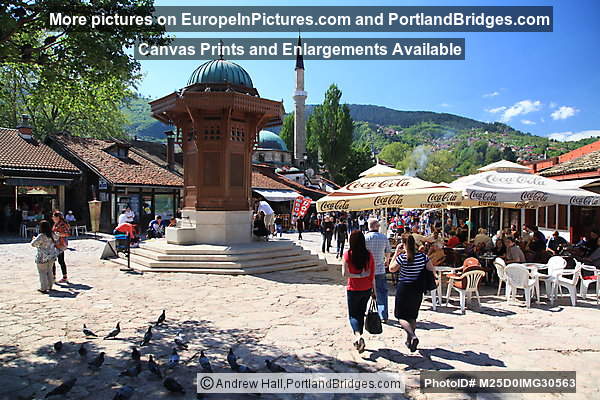 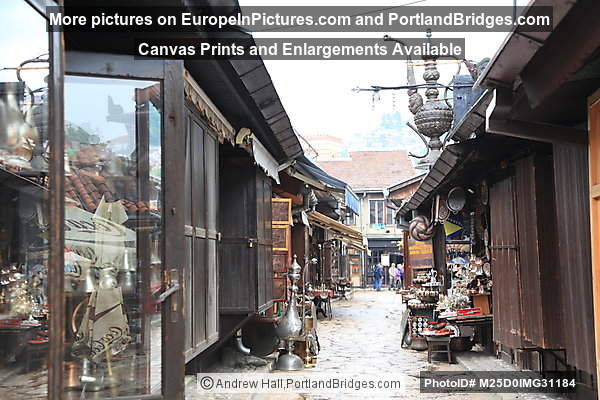 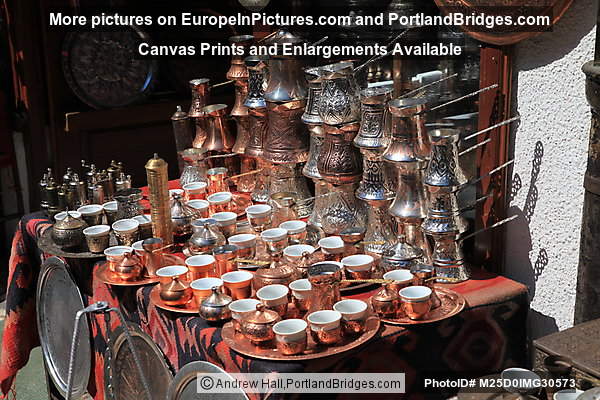 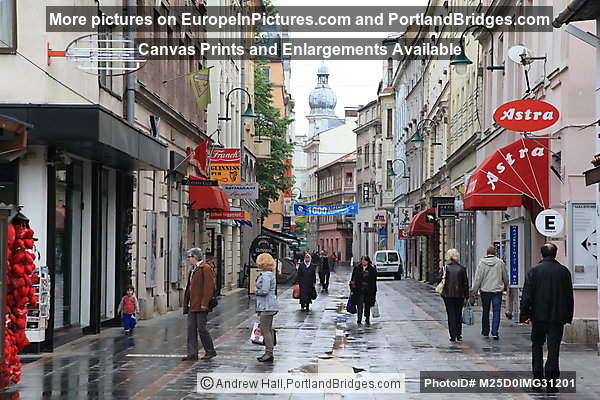 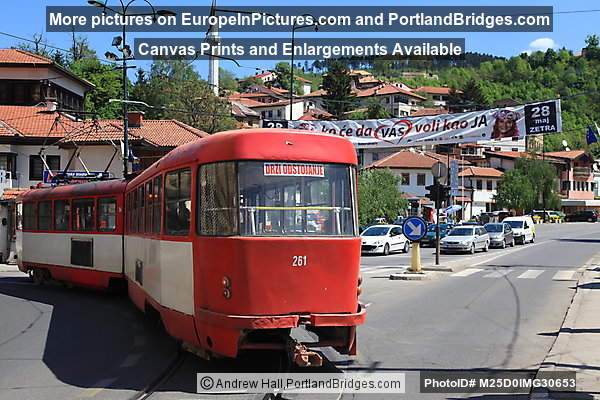 At least the weather was nice. 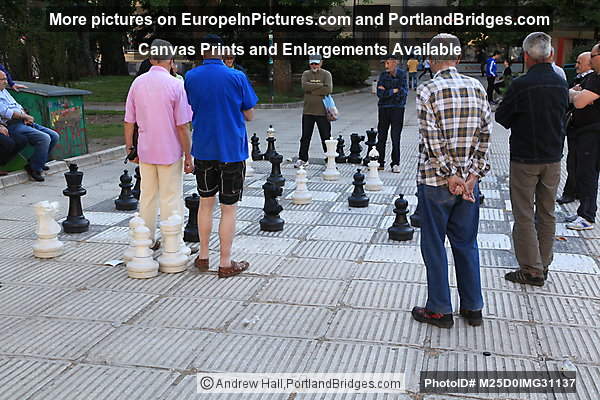 I did tons and tons of walking. I walked all the way up Maršala Tita Street to the old Holiday Inn, through “sniper alley.” 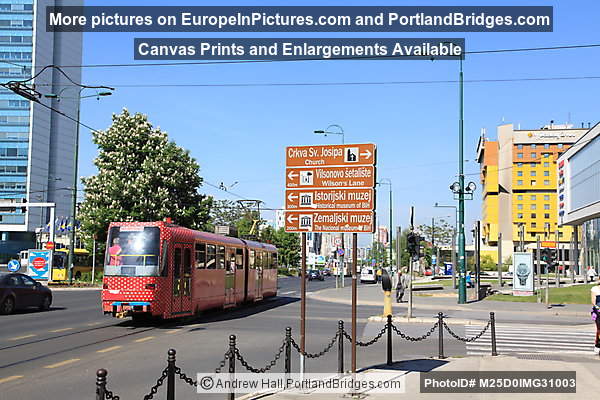 I looked up into the hills to imagine where the snipers must have been and tried to imagine what living in Sarajevo in 1994 must have been like – I couldn’t. In fact, I found it frustrating trying to get a feel for the history of the Siege of Sarajevo. I thought I knew the basic facts of the war and the Siege of Sarajevo pretty well, but making sense of them in context was difficult. I decided to take the “Times of Misfortune” tour from Insider Tours the next day to try to get a better handle on the subject.

Later in the day I hiked up Kovači Street to the Kovači Martyrs’ Memorial Cemetery, one of numerous cemeteries in town that give a poignant reminder of the sad sacrifices of war. Most of the dead here are Muslims: 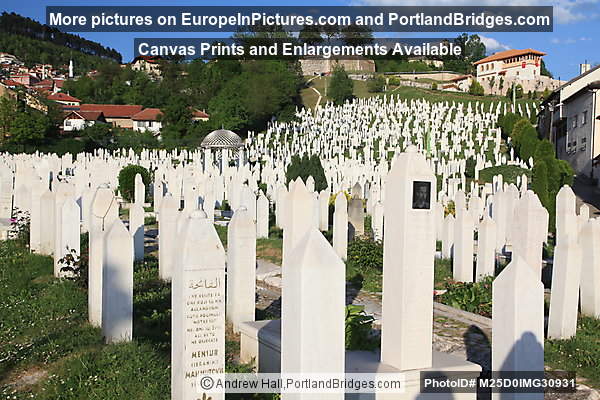 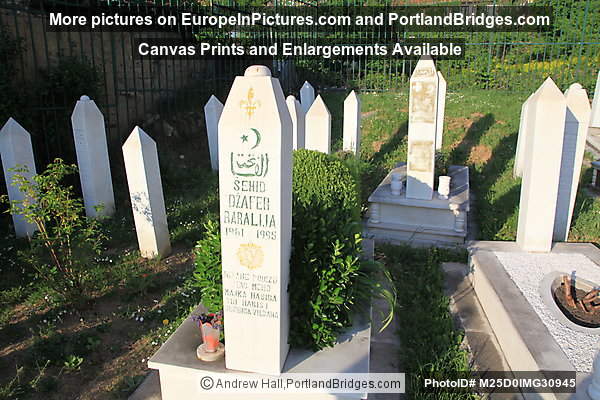 Understanding the assassination of the Archduke Ferdinand was much easier to grasp, however. Reading “The Trigger” mentioned above helped a lot, of course, but the assassination site was right across the street from my hotel, and I walked past it and over the Latin Bridge numerous times. There is a plaque at the very spot where the assasin stood, but otherwise you’d never now anything special happened on that corner. I was able to stand there and imagine the motorcade coming down the road, stopping at the exact worst spot at wrong time to change the motorcade route, right outside the cafe where Princip happened to be waiting with a gun. 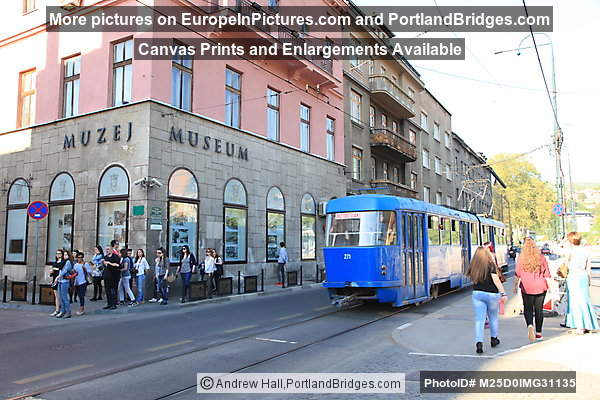 This part of my visit was quite satisfying, being able to see the context for this famous event in world history. (There’s a tiny museum right on the corner at this very spot, “Sarajevo 1878-1918 Museum,” devoted to Sarajevo in the Austrian years. I visited the museum briefly, doesn’t take long.) 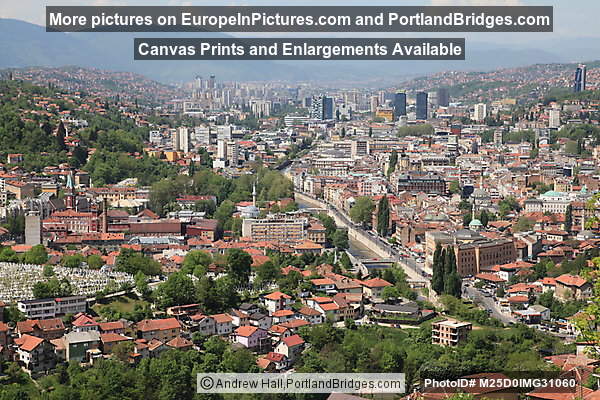 Despite its history, I didn’t find the city very pleasant or charming or interesting to photograph. I guess I had expecting something more exotic or mysterious but it seemed much more touristy than I expected. The Ottoman Old town seemed a bit hoaky. There were plenty of restaurants, nice shops, and hookah bars, not of much interest to me. I had given myself plenty of time to extend my stay in Sarajevo if needed – at least two nights maybe three of four. But honestly, I could have left after the second night. I decided to stay a third night only to take the the “Times of Misfortune” walking tour the next morning. I even considered leaving the next day after that tour. Sarajevo wasn’t turning out to be a fun place for me.

I had to switch hotels after the first two nights – the Hotel Latinski Most was booked up. I was able to book a third night at the Old Town Hotel right across the Latin Bridge and leave my car at the same parking spot (so I didn’t have to drive for three days). It turns out the two front desk people at the two hotels were friends, even though I found and booked the Old Town Hotel on my own before I even found that out.

The second morning I did a quick visit out to the Historical Museum of Bosnia and Herzegovina, which I had walked by the previous day while walking out by Sniper Alley and the old Holiday Inn. (Why didn’t I visit then? Who knows?) This museum – very modest and dated- now focuses on demonstrating how Sarajevo residents lived and survived during the 1990s Seige. I thought this might help set the context for the “Times of Misfortune” tour. The museum had some neat artifacts from the war. I spend barely a half hour there.

The “Times of Misfortune” tour was OK. I learned a few things and got to some spots I didn’t want to drive to (the tour requires a lot of driving in a van from site to site). We ended at the War Tunnel museum, where you could see how Sarajevans smuggled supplies into the city during the Siege from the airport just to stay alive. (A small part of the tunnel survives and is open. I’m tall and I had to stoop down just to walk through it.) The tour guide was a local guy, a secular Muslim, who had grown up in Sarajevo but was only a young boy during the Siege. He also talked about life in Sarajevo and Bosnia today.

One upside from the tour was meeting a nice couple from Wisconsin, and by chance they were staying at my hotel. Because I had been traveling solo for so long, it was nice to have some long conversations in English. We all went out for dinner that night, eating at the Pivnica HS at the Sarajevska Brewery, a big beer hall across the river– interesting place. Dinner was OK. I wasn’t exactly excited about sampling the local food.

I left Sarajevo the final morning in a drizzle. My visit was a bit of a disappointment, only because I had had such high expectations. I loved the history, especially the 1914 assassination site, but I found Sarajevo not particularly charming, nor a place I can ever imagine visiting again. Given that it was a three day break from driving after long driving days through Croatia and Montenegro, my time in Sarajevo was ironically the part of my trip during which I felt the most weary. But the history alone does make Sarajevo kind of a “must see” for any sort of history buff.

I wish I could have understood the Siege of Sarajevo better. I’m well aware that Sarajevo has endured a lot of hardship in the last few decades and still struggles in a rough economy, with high unemployment, so I hate to disparage the city in any way. It seems many people wind up liking Sarajevo better than I did.

My hotels were both good and well located. I wouldn’t want to be anywhere else but near the old town.

View 118 Photos of Sarajevo on PortlandBridges.com