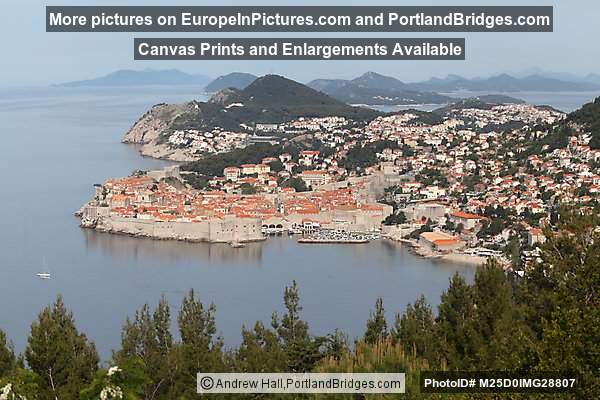 Dubrovnik (viewed from the south)

I spent three nights in Dubrovnik in 2009. Although I found it beautiful and truly unique compared to anywhere else I had ever been – and a photographer’s delight – I just didn’t fall in love with the place for some reason. (Too many cruise ship tourists? Too many sad stray cats? Who knows?) I felt like I’d seen it and had no compelling reason to return. I wasn’t sure if I would stop even for a few hours on this trip.

But Dubrovnik is a logical stopping point on the drive between Trogir and Montenegro. (And you could re-visit worse places for sure.) Nothing else on the map in that area seemed like a compelling place to spend a night. I didn’t really want to stay right by Dubrovnik old town, though – didn’t want to deal with parking my car there. (Without a car, I would stay by the old town – I did in 2009.) I might have stayed in Catvat, parked the car there, and taken a bus to the old town – but I decided to stay in nearby Lapad instead, because I remembered the easy bus connection from Lapad on my 2009 trip. Picking a cheap hotel in a familiar Lapad seemed easier to me.

After my detour to Kravice Waterfall (see above), I headed south for Dubrovnik. People rave about the beauty of the coastal drive to Dubrovnik, which I had done in 2009, but I wouldn’t call it breathtaking all the way down. There is some great scenery for sure, but I don’t consider it the best scenic drive I’ve ever taken. I didn’t find myself stopping to take pictures very often, but there weren’t many easy places to stop.

I found my hotel in Lapad – the slightly run-down Hotel Sumratin – parked my car and headed by bus to Dubrovnik’s old town. I walked through the Pile Gate into town, and memories from my previous trip came flooding back. I remembered a beautiful calico kitten I sort of adopted and fed right inside the Pile Gate while I was there – as I walked past the same spot I wondered if she might still be around four years later? That seemed unlikely, and of course, she wasn’t there now.

I walked along the beautiful Stradun – the “main street” of old town Dubrovnik. By now it was late afternoon, and the cruise ship tourists were long gone. I hoped I might take a late panoramic cruise but by 5PM those boat tours had stopped running (in May, anyway). So I simply walked around and re-acquainted myself with Dubrovnik. I found myself enjoying myself here much more than expected. I found my way up to the Buza Bar, checked out the great view, and hoped the clouds wouldn’t roll in before sunset.

I was lucky to enjoy one of my favorite things from 2009 in Dubrovnik: the swarming of swallows through the old town at dusk, hunting for insects:

Back in 2009, I had found a nice spot above the old town – quite a hike up steps and hills – to photograph Dubrovnik at sunset, with the ocean behind it. I was tempted to find it again, but if the clouds rolled in, would it be worth it? (There’s also a funicular now that takes you up the mountain – something not yet running on my previous trip – but the funicular stopped running just after sunset, and I didn’t care to hike all the way down at night.) I hesitated, then finally decided to try to hike up and find that spot. I huffed and puffed and hiked up many stairs through neighborhoods, trying to remember – where WAS this spot? I should have left earlier…

Finally I stopped in the middle of a neighborhood and started taking pictures at the best spot I could find through the trees and houses, as the evening light was pretty good, even though I couldn’t actually see the sun through the clouds. I resisted the urge to set up my tripod in someone’s driveway. After a bit, I walked up some more – and FINALLY found the spot! It wasn’t so perfect anymore – trees grow a lot in four years, it seems, and now some trees were blocking part of the view I had enjoyed in 2009. Oh, well. I still got a few decent pictures from up there. 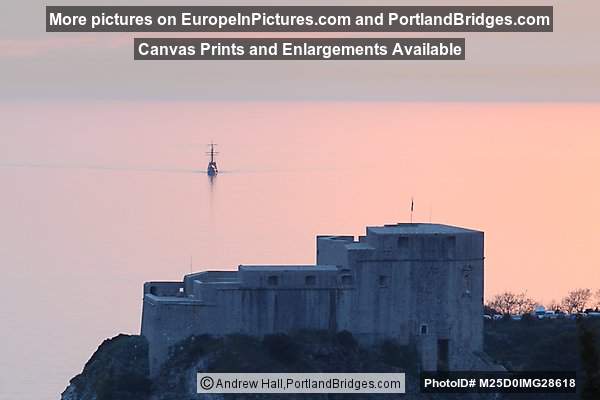 I hiked back down, I took some night shots along the Stradun, inhaled a few slices of pizza, and headed back out toward to the Pile Gate to find my bus back to Lapad.

I passed that spot again where I’d fed that calico kitty – and OH MY GOD there’s a calico cat, is that her??? I got only a few pictures of her before she split inside a maze within the town walls – see the next page…

View 76 Photos of Dubrovnik (2015) on PortlandBridges.com

View 185 Photos of Dubrovnik (2009) on PortlandBridges.com