I soon made it to Jezerce (the village by Plitvice) and easily found the little B&B, the Villa Lykos, I’d just booked maybe an hour ago. I knocked on the door and the owner greeted me, polite but confused. She wasn’t expecting any other guests this evening. I managed to explain that I had just booked it a room. She checked her FAX machine and came back with my booking, just received! She showed me the room.

I drove to the Hotel Bellevue, one of the park hotels, to use their ATM to get enough Croatian Kuna to pay for the B&B then picked up a pizza to go at the pizza place in town (in the place that rents ski equipment, one of the few actual restaurants in town), then headed back and called it a night.

The next morning I checked out of the Villa Lykos (great place for the money – cheap, no meals, but I spent less than twelve hours there) and made it to park entrance #2 by 7:30. (The park itself opens at 7am.) Parking is charged per hour but the price is capped after several hours.

I had hoped to enter the park early to avoid the tour groups. As with my 2009 visit, I started at the Upper Lakes trails near entrance 2. To get into the park, I walked down the hill past the Hotel Bellevue to the boat launch and waited for a boat to take me the short distance across to the main Upper Lakes trails and a bunch of waterfalls. I waited on the empty boat for about ten minutes – I was the only person on it – I guess they wanted to wait for more passengers, but no one else came, so finally they took me across by myself. 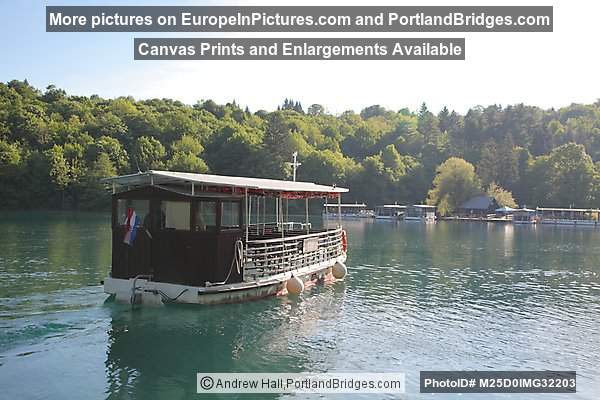 I tried to remember these falls from 2009 – which ones were going to be the best to photograph? I did manage to get some great shots before the big tour groups arrived. I’d seen them last time in October, when the falls weren’t running as heavy as they were now after the spring rains. 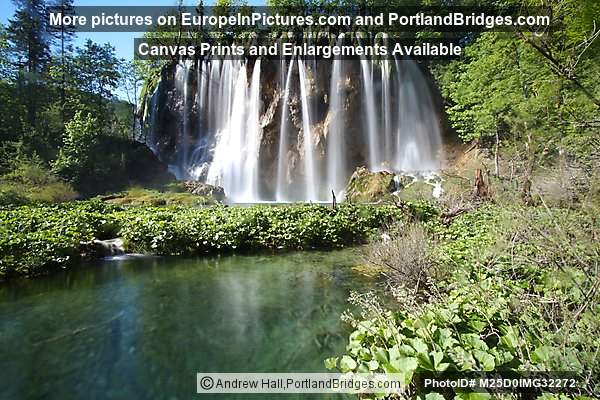 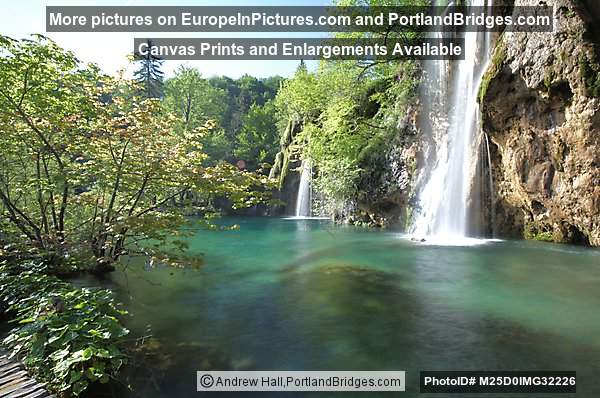 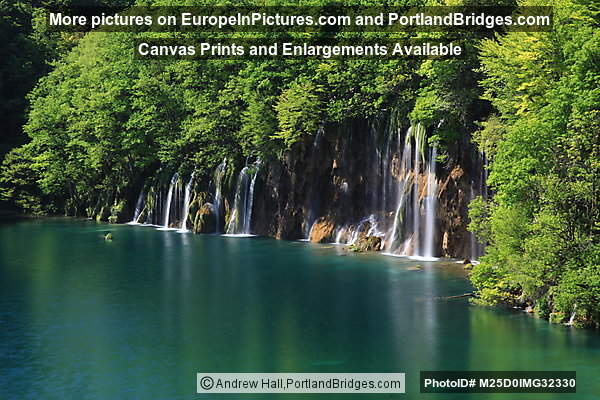 The frogs were loud in places, as they had been in Trebinje. It was a beautiful day to visit the park – clear skies, for a change.

If I haven’t said this yet, let me just repeat: Plitvice Lakes is an amazing park, like nowhere else in the world. It is worth seeing twice. There are dozens (hundreds?) of waterfalls, sometimes at every turn. Not all of them are very big, but together they are magnificent. There are big turquoise-colored lakes full of huge trout. (Fishing is not allowed in the park.) 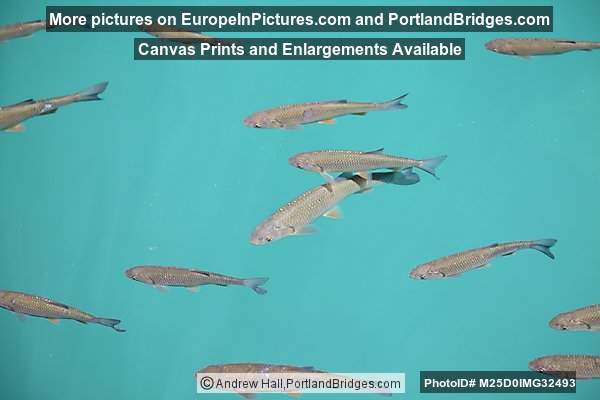 The park is well developed and easy to navigate – there are wooden “boardwalks” taking you through the mud and over water. You don’t really have to “hike” much to get around. 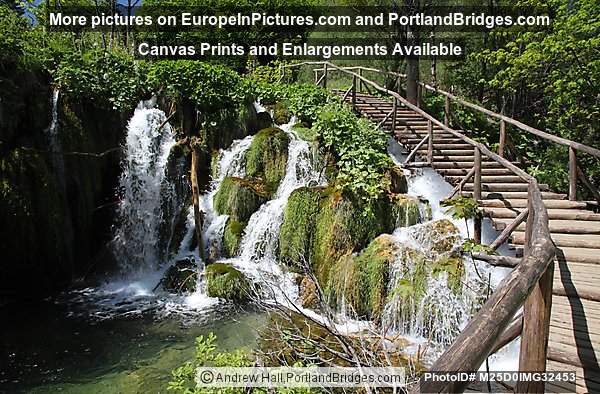 More and more tourists appeared as the morning went on. I talked to a few of them on the trails. Plitvice is very touristy, so a lot of English was spoken. A woman stopped me and asked if I spoke English, so she could ask me a question. (She was from Portland.) Soon I ran into some old friends: the couple I’d met a few nights earlier in Sarajevo. It wasn’t a surprise – they had said they would be in the park that day. I ran into them several more times that day on the trails.

After I finished at the Upper Lakes, I took the boat across to the Lower Lakes (about a 20 minutes across – the boats run only twice an hour). At the Lower Lakes boat launch, there is a snack bar where you can get junk food; I had a burger there for lunch. Then I hiked to see some of the lower lakes falls. 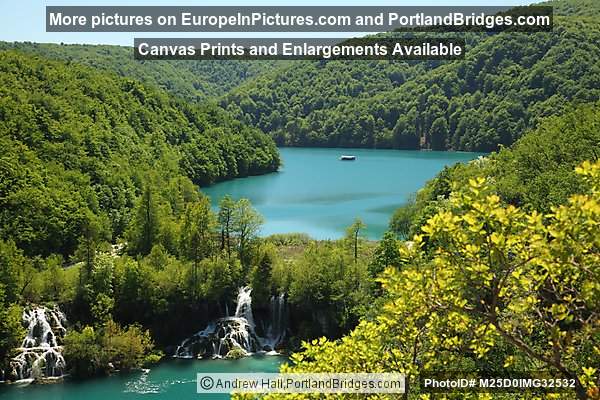 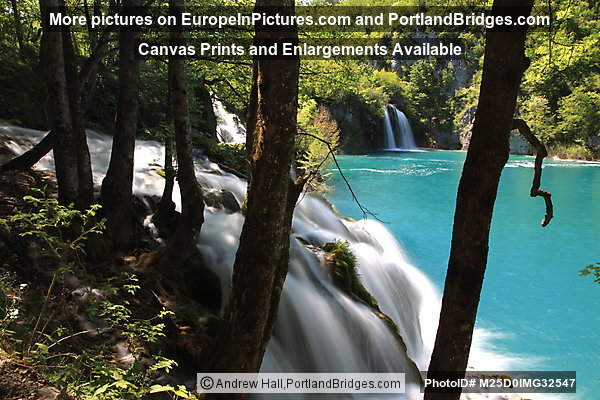 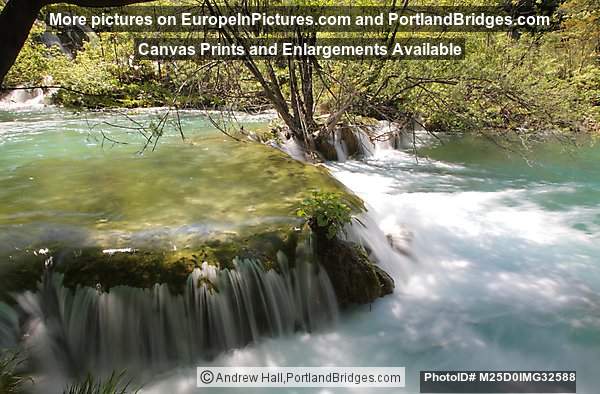 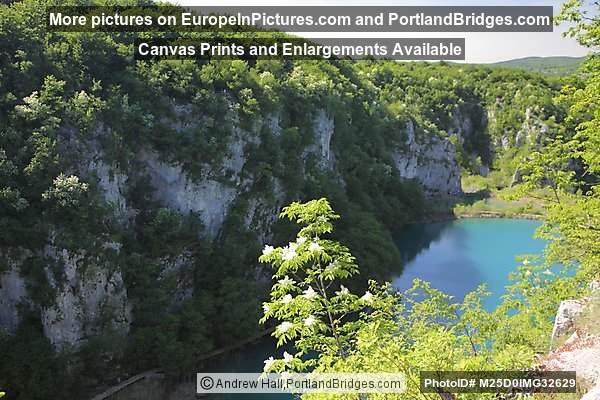 What some consider the park’s most impressive waterfall – Veliki slap (“The Big Waterfall”) – wasn’t my favorite falls in the park. 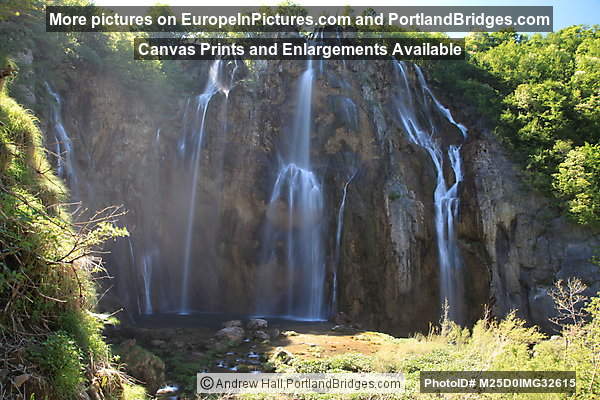 This is a case where I think we have more impressive waterfalls here in Oregon. What makes Plitvice special is not one specific waterfall but the bunches of little falls, the color of the lakes, the whole setting. I will say that the other big falls I’d seen on my trip – like the Skradinski Buk at Krka – are much longer and bigger (cascading) than anything we seem to have in Oregon.

I was done and out of the park by about 3PM, so I spent almost eight hours there. You could probably do it in five or six hours – I took plenty of time to take pictures. Soon I was headed north to Samobor, about two hours away.

Below you can see all of my 2015 photos from Plitvice – though I didn’t post as many from this visit because I’d already taken a bunch in 2009, which you can see below, as well:

View 40 Photos of Plitvice Lakes National Park (May 2015) on PortlandBridges.com