The drive from Rijeka to Rovinj (just over an hour) was via the Ipsilon, a toll road (not always more than two lanes) and an impressive feat of road engineering that provides a relatively flat drive using viaducts over numerous the Istrian hills.

Viaduct, Driving Across the Ipsilon, Istria

It was getting dark, and I saw the sun setting as I drove into Rovinj. I had booked a B&B called Vila Kristina in a neighborhood just outside of the old town (free street parking; old town Rovinj does not allow cars). It turned out to be about 15 minute walk to the old town. It wasn’t such a bad walk, but I did it a few times and it became tedious after a few times – though I found that my favorite spot to shoot photos of the old town was through the old harbor boats on the walk into town. 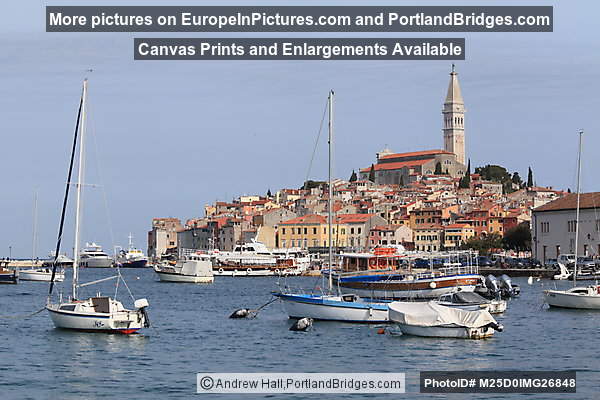 Even though I was exhausted the evening I arrived in Rovinj (I had arrived in Europe only the day before and was still jet laggs), I met up with an online friend, who happened to be in Rovinj and had that night free. I stumbled into the old town and barely managed to find the wine bar where she suggested we meet. We had a nice chat. It’s always fun to meet people on these long solo trips.

After a good night’s sleep at the Vila Kristina, I set out to explore Rovinj the next morning. I had been anxiously watching the sometimes rainy weather forecast, hoping for better weather; this first morning was overcast, not ideal photography weather but dry, at least. I scouted for the best photo locations for later with my pocket camera instead of my DSLR, hoping to shoot better shots later.

But as I strolled along the harbor into the old town, I became enchanted with Rovinj and felt thrilled to be there. It was a quiet, peaceful morning with no one out but fishing boats, seagulls, and cats.

Cat on the Rocks, Rovinj Harbor 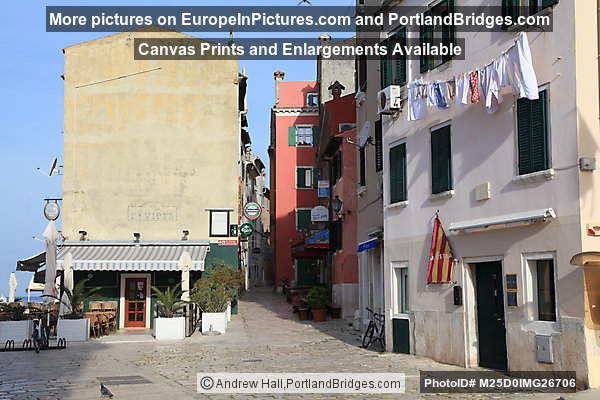 I walked first around the outside edge of the town by the water, with the main town rising up above me on a hill, with the Church of St. Euphemia’s Venetian bell tower sticking up above me. After walking around Rovinj, I climbed the hill through the narrow streets. The town looks like a postcard from afar but only gets more charming the closer you get. It felt a little like Venice without being in Italy – and without the crowds.

Rovinj may be touristy at high season – and I saw plenty of the shops and restaurants that cater ed to tourists – but on this April morning it felt like a real town, not a tourist trap. Later in the day I saw some tour groups in town, but they never seemed unbearable. The next morning, May 1 (a national holiday) a local school band performed a concert on one of the main squares, and most of the people watching them seemed to be parents, not tourists.

By the time I returned to Rovinj that first afternoon after a few hours in Pula (see below), the sun had come out, and I hustled up to Church of St. Euphemia to climb the bell tower and get the best views of Rovinj. 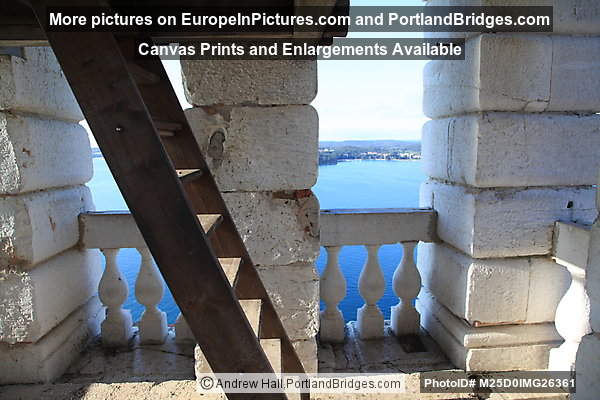 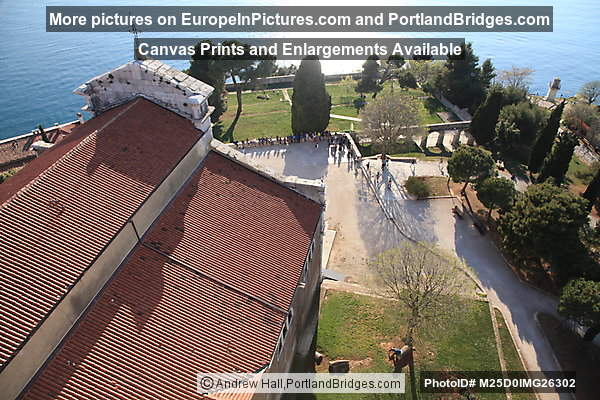 View down from Bell Tower

I had the top all to myself and took my time snapping photos. As I finally started my climb down, I noticed a little group of kids climbing up, so my timing was perfect.

I decided to photograph sunset from the harbor south of old town – on the walk from my B&B – then shoot pictures at dusk and night in the old town. The sunset across the harbor into the ocean was gorgeous. Unfortunately, it was the only good sunset I’d see on this entire trip. Thank goodness I’d seen beautiful sunsets on the Adriatic before. I was pleased with some of my night pictures of Rovinj. 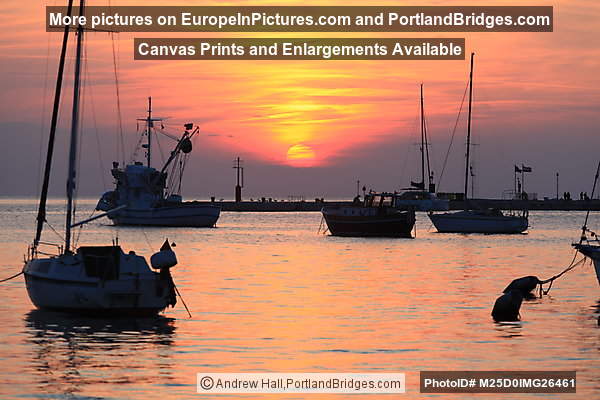 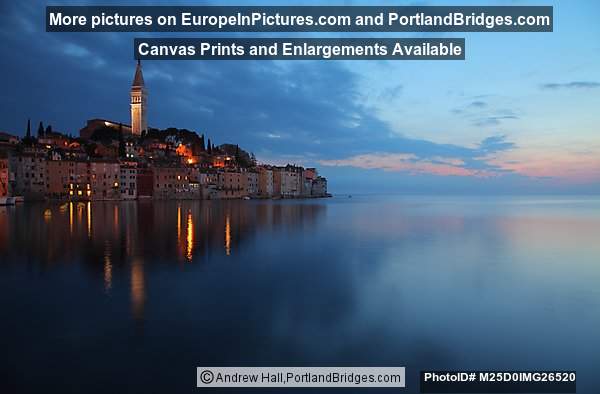 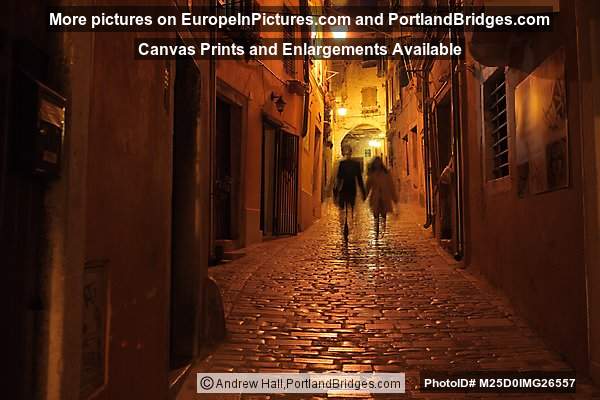 I picked up a take-away pizza from one of the harbor restaurants and ate it back at the B&B.

On Friday, my morning, the sun was out again, and I shot some final pictures before heading off to visit some Istrian hill towns.

I absolutely loved Rovinj. It’s small and doesn’t take much time to explore, but it’s a great base for exploring Istria. And it’s a delightful place to come back to at night. I’d recommend the Vila Kristina if you have a car and don’t mind the 15 minute walk, much of which is pleasant anyway. If you don’t have a car, I’d stay somewhere closer to the old town.