Driving out of Dubrovnik, I almost missed a turn – I was in the wrong lane – and hit a curb hard with car’s the front wheel, bending the rim a little and ruining the alignment. I could drive the car straight at normal speeds, but the steering wheel was turned far to one side while I was driving straight, and a warning light on the dash came on. Fortunately, I would be driving past an Oryx office on the way to Kotor, at Dubrovnik airport. I was able to stop there and switch cars – to a slightly larger car, unfortunately – and lose only about an hour before moving on to Kotor.

The main border crossing into Montenegro from Dubrovnik probably wasn’t busy in early May – sounds like it can get busy in the summer – but I opted to take an alternate crossing anyway, via Konfin, Croatia / Kobila, Montenegro that I’d read about in my Rick Steves book. (Buses cannot use this border crossing, so tour buses can’t cause backups here.) There was no one ahead of me as I entered the Croatian checkpoint, but the guard was on a mobile phone call for five minutes and made me wait until he was done. Otherwise, crossing the border was routine. My rental car’s green card (insurance card) was checked.

Montenegro doesn’t feel like anything special at first as you drive south through Herceg Novi, but soon after you see the water of the Bay of Kotor, and the scenery becomes spectacular. There is a ferry at Herceg Novi that you can take you across the bay quickly nearly to Kotor, but I wanted to drive clockwise all the way around the bay and take in all of the scenery. I stopped quite a few times for pictures. Soon after Herceg Novi you get to a great viewpoint across from the town of Perast (if you have a long lens, anyway), 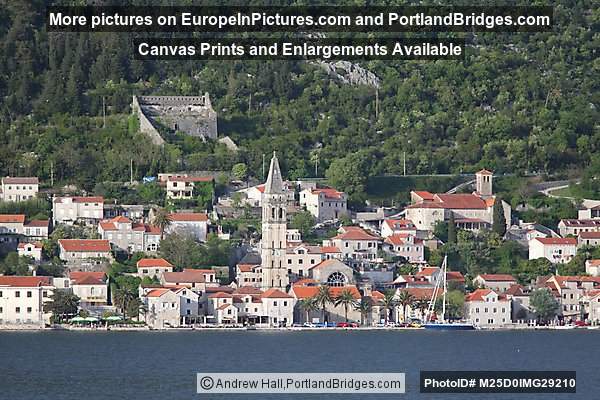 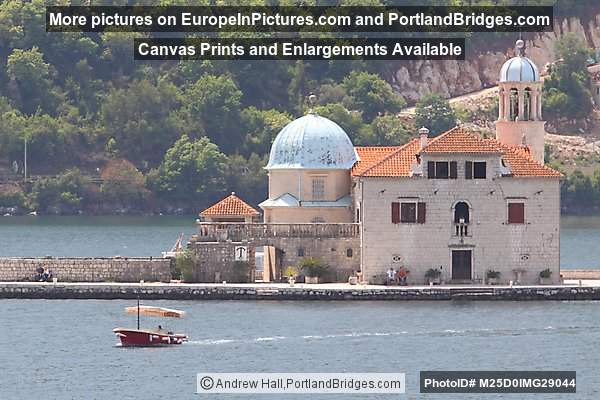 Church of Our Lady of the Rocks, Bay of Kotor, Montenegro

The view of the church from near Herceg Novi isn’t bad in the late afternoon. Later in the day, I drove back to this viewpoint close to the Golden Hour for better light. 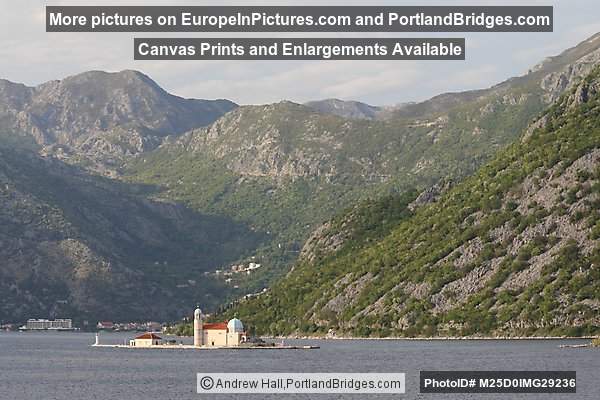 Church of Our Lady of the Rocks, Bay of Kotor, Montenegro

Perast – which you get to driving clockwise about 20 minutes before you get to Kotor – seemed like an awesome little town. I spent maybe an hour there walking along the waterfront and taking pictures late in the day. It seemed more quiet and peaceful than Kotor, and I’d consider staying there instead of in Kotor if you want a more quiet experience. 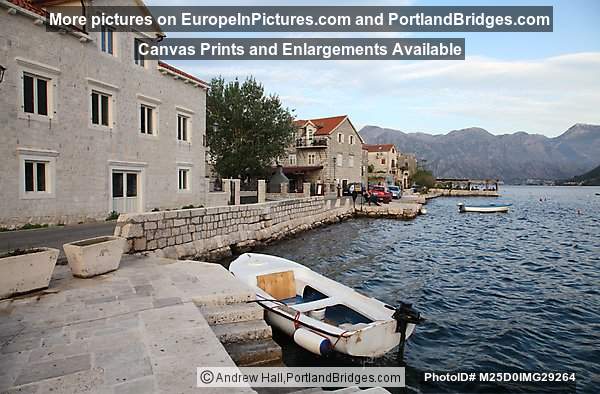 Bay of Kotor from Perast 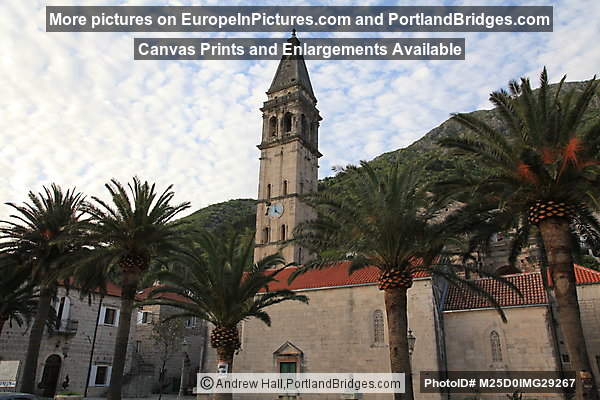 Finally, after my halting drive around the bay, I found my B&B (Vila Panonija) in Dobrota, just to the north of Kotor, checked in, and walked 10-15 minutes into Kotor from there. (Dobrota is a long narrow strip along the bay north of Kotor, kind of a suburb; not everywhere in Dobrota is ideal for walking into Kotor. I would have not wanted to stay anywhere else in Dobrota further north than I was.) I passed through the Kotor walls through one of the town gates and found some take away lunch to eat as I explored. I bought a SIM card for my phone at a T-Mobile store right inside the walls. And I explored the old town. 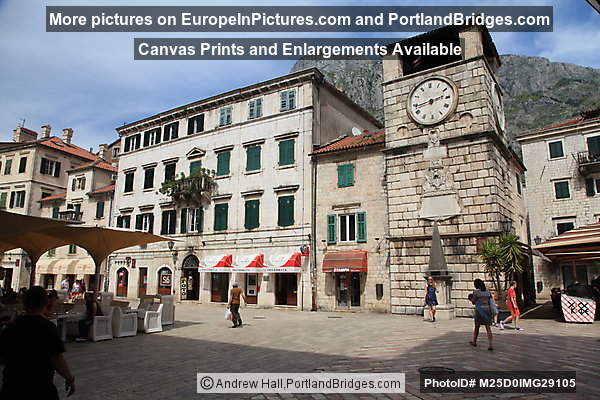 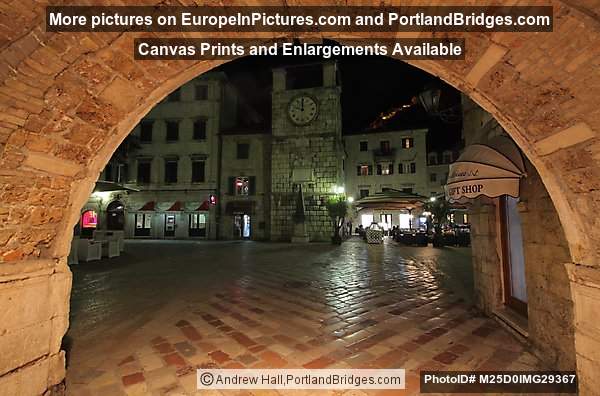 Kotor was nice – but compared to Dubrovnik, it is felt a bit of a step down, I’d say. However, I enjoyed walking the walls above Kotor the next morning. 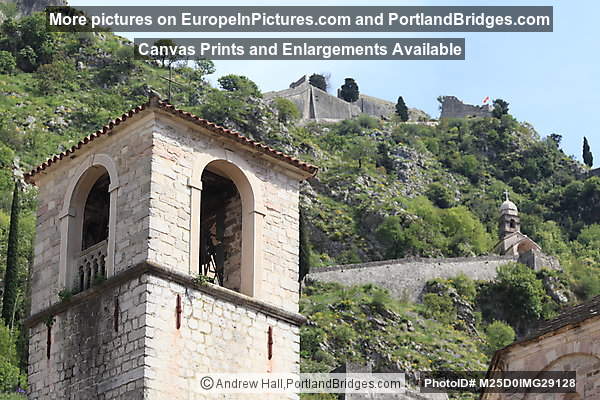 Hiking Up The Town Walls Above Old Town Kotor

“Walking the walls” in Kotor means a steep hike above the town, up many steps, whereas in Dubrovnik you are walking around the town without much climbing. The views from the walls down onto Kotor and the bay are incredible. 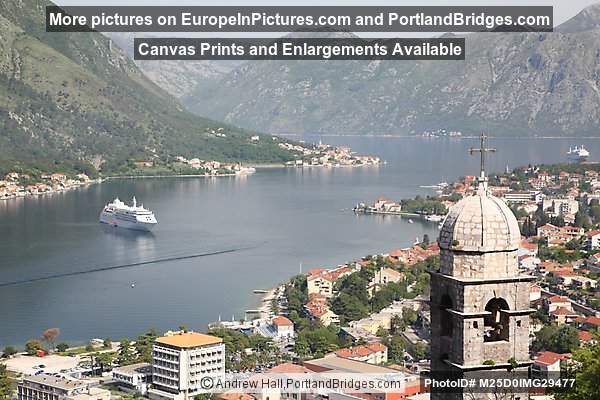 Bay of Kotor from Town Walls 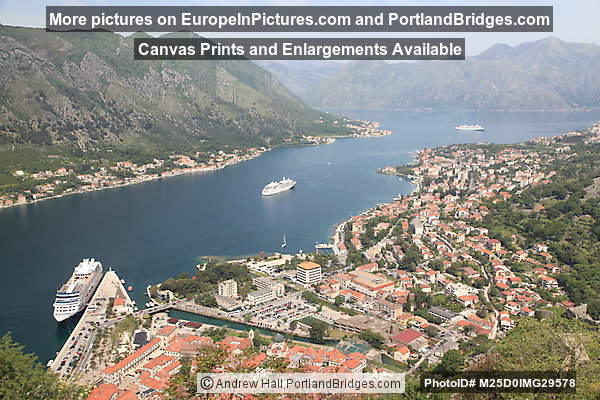 Bay of Kotor from Town Walls

I hiked first thing in the morning and still had to compete with obnoxious cruise ship tourists who didn’t seem to care if someone had just setup a camera on a tripod that they were about to walk in front of. (“Hey, let’s pause here for a while.”) The light for taking pictures from the walls above Kotor is most definitely best in the morning; by afternoon you will be shooting into the sun and it will be a lot warmer, too.

After my walk up the walls, I hiked back to the B&B, checked out, and started a scenic drive up through the mountains to the city of Cetinje via the town of Njeguši (if you use a GPS, it may want to take you to Cetinje along the flat coastal road via Budva). I had read that this curvy mountain drive – 25 switchback turns up the mountain – was incredibly scenic but also a bit scary to drive. The scenery is indeed amazing. 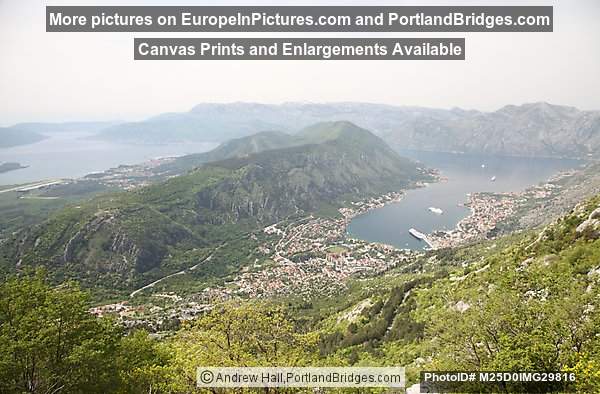 View of Bay of Kotor from Above 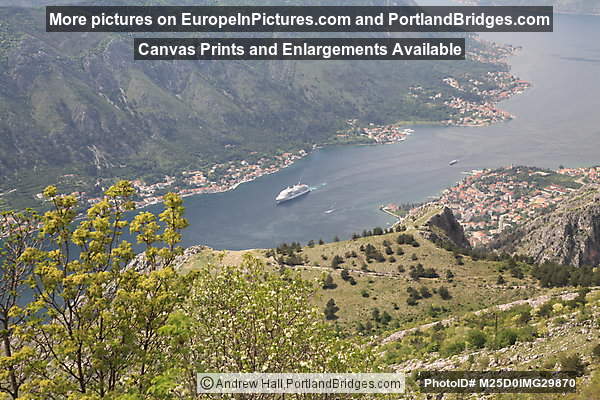 Bay of Kotor, View from Above

At some point you are basically above the high point of the Kotor town walls hike I had done a few hours earlier, but you can also see panoramic views of the bay below. My big disappointment was that some ugly clouds had rolled in, not making it overcast exactly but making my pictures kind of ugly. You would want to do this drive in the morning, too, to get the best light onto the bay so you aren’t shooting into the sun.

But I didn’t find the curvy drive all that difficult or scary – I had been prepared myself for something far worse. The road is fine. You just have to take it easy. It’s even possible to pull over to take pictures of the breathtaking views, something I did numerous times. Cars and even buses do come down the mountain along the barely two lane road, and it’s sometimes hard for two vehicles to pass in opposite directions. More than once, as I was driving up the hill, a bus was driving down. 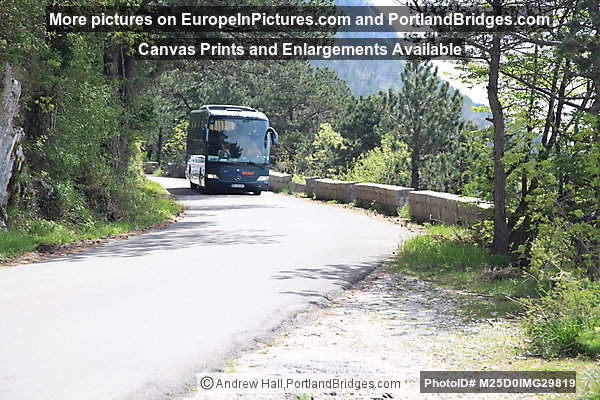 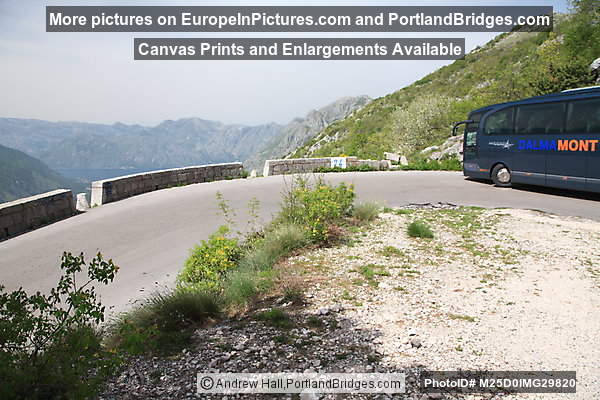 I didn’t freak out – the bus drivers were clearly more experienced doing this drive than I was. Once, I let a bus back up (going up hill) maybe 100 meters to a slightly wider part of the road so I would have room to pass him going up. I was never scared. I was patient.

The last views down on the bay are gone after you pass switchback #25 going up, and as you head toward Njeguši the landscape becomes more rugged and rural. Njeguši is not much of a town to see, but the scenery is interesting. I stopped numerous times to take pictures, sometimes out my car window (there wasn’t much traffic mid-day). 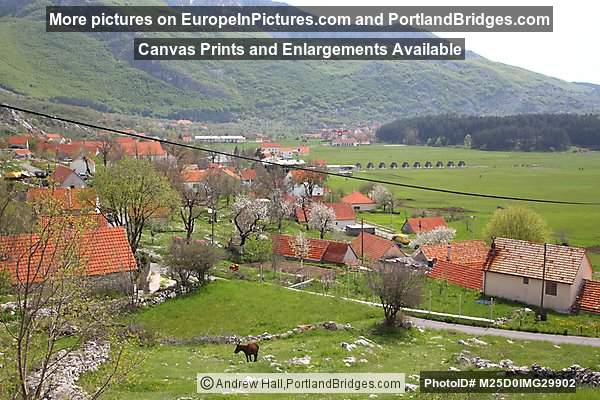 Once I was taking pictures through the car window and some pedestrians walked by and waved to me, and an old man reached into the car window to shake my hand as he walked past. He said something in his local language that I of course didn’t understand, and then he said “Montenegro!” with a friendly smile. I guess he was just welcoming me.

Eventually I made it to Cetnje and got out to stretch my legs and plot my drive out of Montenegro up to Bosnia. Cetinje has kind of a town center but mid-day it was pretty dead – not much to see as I walked around. I bought some snacks at a local grocery store then moved on. 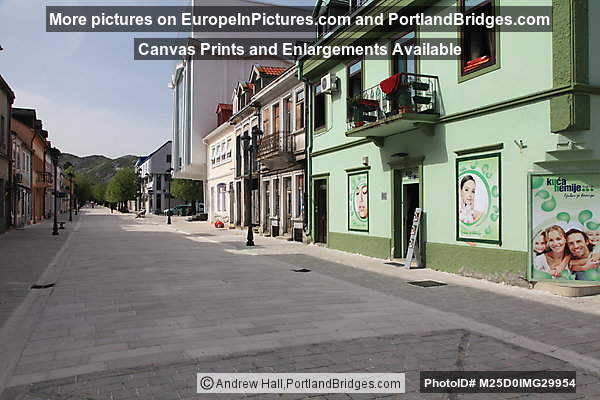 I drove back toward the Bay of Kotor via Budva (where I didn’t stop – maybe I should have. Something to go back to!) and eventually took the ferry across the bay back to Herceg Novi, then headed north toward Trebinje, BiH. 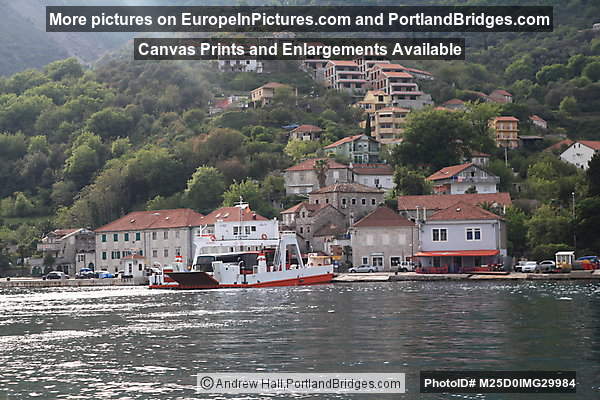 Bay of Kotor from Ferry

As for my brief trip to Montenegro, I loved the scenery of the Bay of Kotor from all vantage points: driving around the bay, walking above the walls of Kotor, and doing the scenic mountain drive above Kotor. It was amazing. I didn’t care that much for the city of Kotor itself – it’s nice enough but didn’t impress me compared to Dubrovnik and other magical places I’d seen. I loved Perast from my brief stop there.

I was frustrated by the weather, even though I was glad (really glad!) it wasn’t raining. The sun was rarely ever out fully, and sometimes I had to wait patiently for the clouds to part just to get a minute of sun to light a beautiful scene I wanted to photograph. Ideally, I would have shot pictures in the morning from three or more separate locations around the Bay of Kotor, but of course it was impossible to be everywhere at once. I had to choose which locations I wanted, with the iffy light there was, in the limited time I had.

Looking back now, I probably should have spent another night in Montenegro. But I was feeling anxious to get up to Sarajevo, which I thought I might love (I didn’t). With 20/20 hindsight, I would have taken a night from Sarajevo and spent a second night somewhere else in Montenegro.

Vila Panonija in Dobrota/Kotor was nice enough– free parking, helpful staff. Not very busy in early May. The owner emailed me directions to find it including pictures – which would have helped a lot if I hadn’t booked it the same morning; I didn’t get his email until after I’d arrived. (I still found the place pretty easily on my own.) The only downside to staying here was the walk into Kotor – which wasn’t terrible, only 10-15 minutes and something I had expected, but it might be too far for some people.

View 126 Photos of Bay of Kotor, Montenegro on PortlandBridges.com