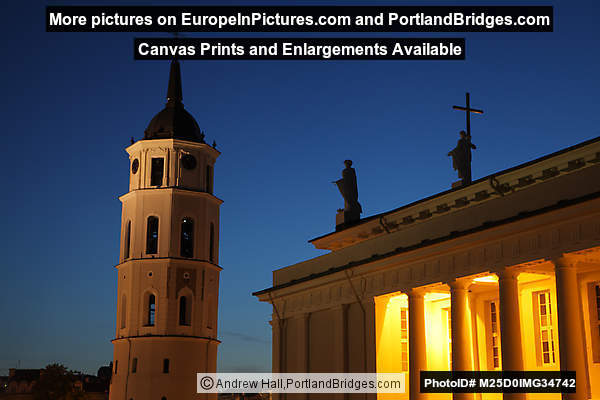 I had no checked bags, so getting out of the airport upon arrival in Vilnius was quick.
At a convenience store just outside baggage claim, I bought a 72 hour pass for the Vilnius public transit system – a disposable chip card you swipe past a scanner box when you get on and off the bus. Then I took mini-bus #88 – part of the public bus system in Vilnius – from the airport to the Rotušė stop near the center of the old town, then walked the short distance to my hotel, the Centro Kubas Angel. The hotel is in a nice location in the old town, just off Pilies gatvė (Castle Street), the main drag through the old town. The hotel was interesting and comfortable – my room faced an interior courtyard with a lot of folksy decorations around. It was warm enough that I was glad the hotel had air conditioning!

Soon I found an ATM and got some Euros. I arrived with 20 Euros in my wallet from a previous trip and did even bother using the airport ATM, something I usually do. Even so, I didn’t use much cash in Lithuania. My Chase Visa card with chip was accepted everywhere I used it. 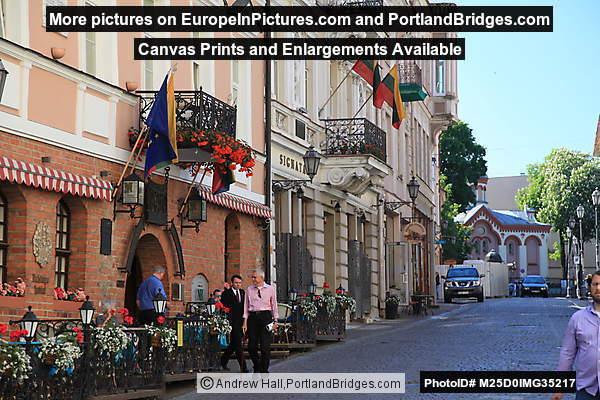 The weather was warm and perfect in Vilnius, and my excitement at finally beginning my trip overcame my fatigue, so I set right out to explore Vilnius. I walked down Pilies gatvė to the huge cathedral square. Pilies gatvė is probably the “main drag” of the old town; it’s lined with cafes here and there and the odd church or interesting building. It is touristy…but didn’t feel touristy. The cathedral square and its bell tower are together probably the most photogentic attraction in town. I shot numerous pictures of it from different angles. 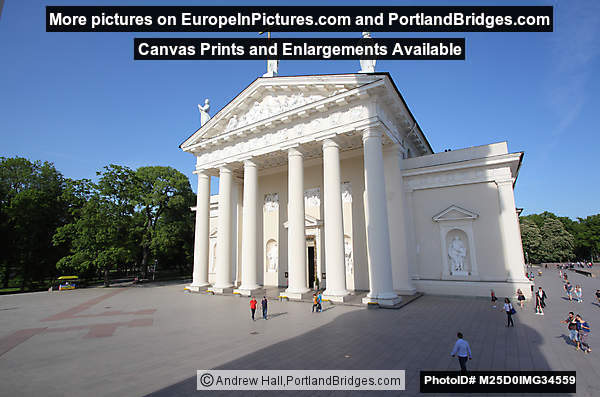 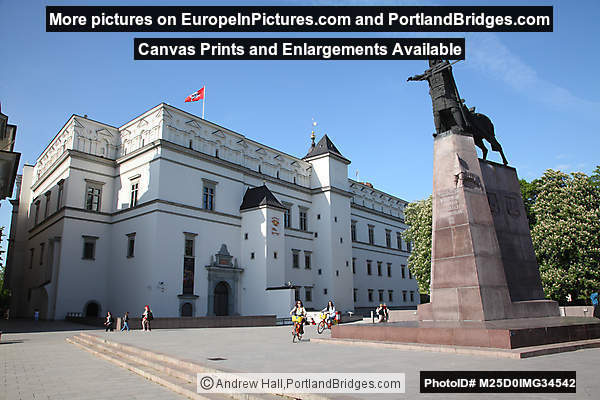 From cathedral square, I hiked up to Gediminas hill for the view down on everything. Vilnius isn’t exactly what I would call a picturesque town. The views down from the hill were nice but not quite beautiful. The cityscape is a bit busy, but you can see a lot of beautiful individual buildings – lots of churches. The old town is to the south of the Neris River. There’s a modern city with skyscrapers etc. across the river but I didn’t have time to venture even across the river. The “New Town” is actually a small development to the west of the old town, also on the south side of the river. 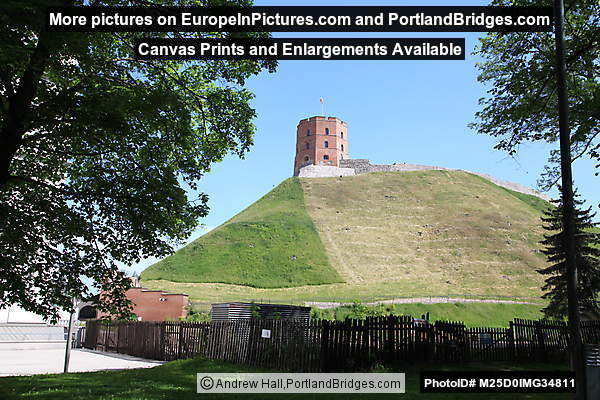 Vilnius has a relaxed, rambling feel to it. It’s a town built on hills. The old town is nice, but other parts of town feel run down. This didn’t detract from my enjoyment of Vilnius at all, just an observation. After I had seen the other Baltic capitals, Vilnius seemed like the least touristy of them all. But the locals seemed more well dressed, more formal than other stops on my trip, even compared to other places in Lithuania I visited. 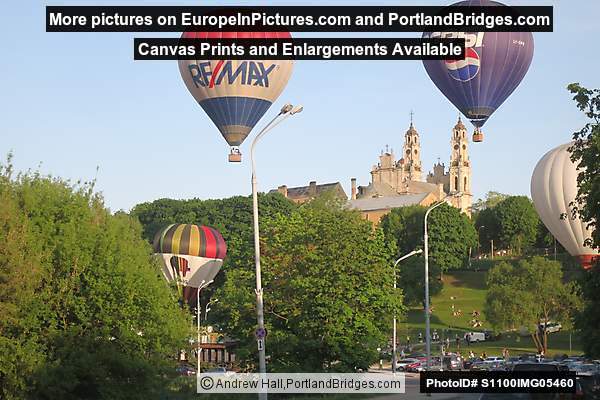 Balloons, Church of the Ascension of the Lord, Vilnius

Vilnius is known for its many interesting churches – they seem to be around every corner! I felt like I’d seen more than my share of churches in Europe, but there were some unique churches here unlike any I’d seen elsewhere. I photographed many of them but went inside few.

Back from Gediminas hill, I walked from my hotel down across the river and into Uzupis – a bohemian neighborhood that’s become trendy in the last few years – and grabbed a pizza for dinner. On the way I saw a bunch of hot air balloons rising from a nearby field. It seems Vilnius is known for its hot air balloons; I saw them rise again the next evening.

I went out at dusk to shoot pictures both nights I was in Vilnius. I like to shoot night pictures (with a tripod) when I travel in Europe. One issue with traveling so close to summer equinox is that the days were already long, and as I traveled north they got even longer. Sunset was about 9:30 the first night in Vilnius, which seemed really early once I got up to Tallinn a week later. Shooting so late meant I had to grab dinner and then go take pictures afterward, then go to bed. On that first night, I was exhausted from the long day of travel, but I adhere to the “stay up all day, go to bed at local bedtime” method of combating jet lag,” so I stayed up til about 11PM. 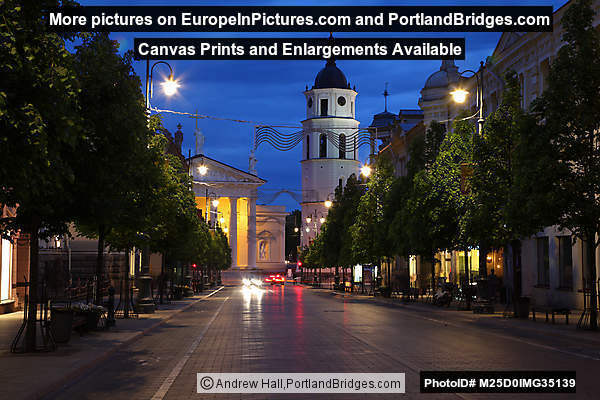 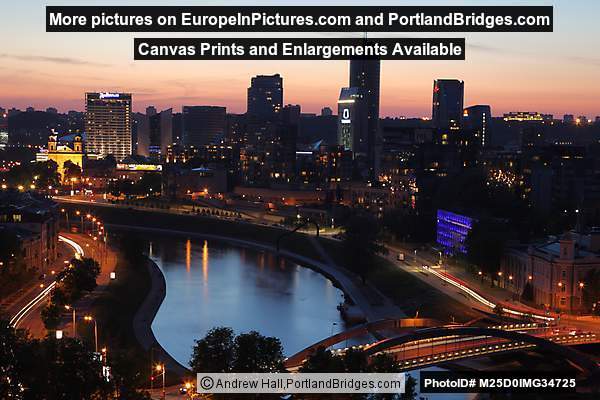 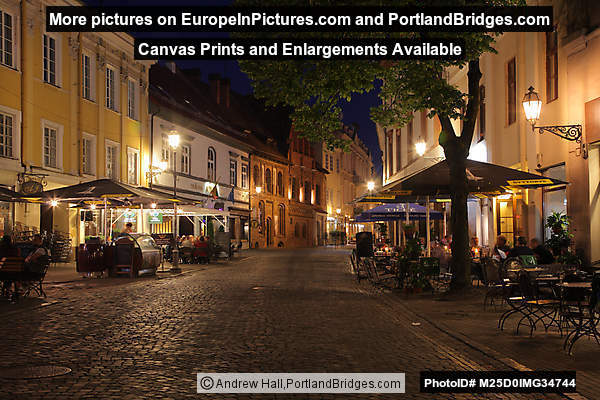 The next day, I wanted to take a walking tour in Vilnius – there were free walking tours daily at noon – but the timing didn’t work for me. I’d arrived too late the first day, was leaving for Kaunas the third day, and on the second day I wanted to get to Trakai and back for a day trip before it got too late in the day. Somehow, sticking around the second day just for the tour didn’t make sense. I also considered taking a “Soviet Walking Tour” but none were offered on any of the days I was in town.

So the second day, I took the standard day trip to the town of Trakai, about 30 minutes by train from Vilnius. (See below.)

After I got back to Vilnius, I tracked down the Frank Zappa monument in the New Town. A Frank Zappa monument, in Vilnius? Turns out he never even visited the country and had no connection to it. This monument was created to test the limits of freedom in newly independent Lithuania in the early 1990s. There’s not much to the monument – just a bust of Zappa on a high pedestal and some graffiti in a small parking lot, you’d barely notice it if you didn’t know what it was.

The last thing I did on the second day was to visit Antakalnis Cemetery, a beautiful, rambling cemetery about 10 minutes outside the old town by bus. From the bus stop, I walked about 10 minutes to the entrance. The forest cemetery is unique: there are big monuments and small graves kind of scattered all over the hill. There are a lot of unique monuments plus there are specific sections for victims of the 1991 uprising against the Soviets, a big section devoted to those killed during the Nazi occupation, even a monument to soldiers killed during the Napoleonic wars. The whole thing is set in the hilly forest. If you like cemeteries, this one is definitely worth a visit.

On my final morning in Vilnius, I walked back into Uzupis to explore it more thoroughly. At some point, it “seceded” from Vilnius and produced its own constitution, which you can see proudly displayed in several languages on gleaming plaques in the center of the neighborhood. But these days, it seems Uzupis has become somewhat gentrified and trendy. It’s still a nice area to venture into, quite a a contrast to the old town for sure.