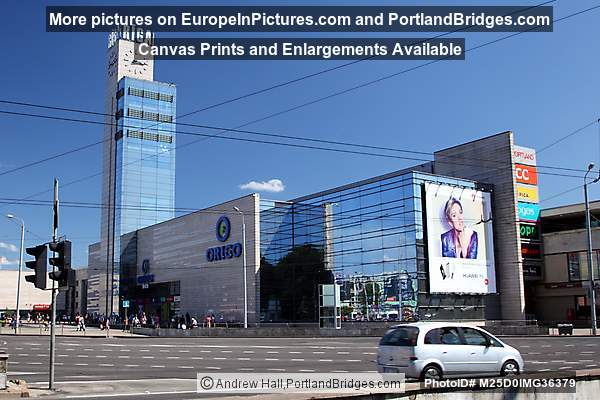 Leaving the Riga bus station after being dropped off by the Ollex mini-bus, I rode a tram one stop without a ticket (I had tried to buy one from the tram driver before he took off; at the next stop I just got off and decided to buy a pass). I got off in front of a Narvesen, a popular convenience store that seems to be EVERYWHERE in Riga – there must be hundreds of them. At Narvesen I bought a 3 day transit pass (not 72 hours unlike Vilinus), then hopped on another tram (guided by my phone and Google Maps) and found my way to my hotel. I had to walk several blocks after the last bus dropped me off.

I stayed at the Hotel Edvards, a modest but very friendly hotel somewhat away from the old town but close to the Art Nouveau district. I had known from the start that this wasn’t an ideal location for a tourist, but I couldn’t settle on a better place ahead of time when searching for alternatives: either the prices were really high or the location was just closer to the train station (often not the nicest part of town). I didn’t necessarily want to be in the old town, either, because of its reputation for loud parties. I couldn’t commit to an AirBnB place because I wasn’t entirely sure which day I’d arrive in Riga.

So I stayed with the Edvards and it was fine. The walk from th Edvards to the old town was not bad but sometimes tiresome with camera equipment, and I did the walk a few times. Even with the transit pass, I had to do a lot of walking; Riga’s bus stops seem to be pretty far apart. Upon reflection, I would be OK staying in this location again – but I might choose a place close to the central market and near the train/bus stations next time, not necessarily in the old town. Some will say this area may not be the most desirable or safe, but the location seems fairly good, especially if you will do day trips by bus/train.

I was exhausted after my long day of bus rides and exploring Šiauliai, etc. so I told myself I’d just grab dinner and call it a night and being exploring Riga tomorrow. I grabbed a quick pizza dinner then talked myself into a leisurely stroll into the old town, leaving my camera gear behind, just as the sun was setting. That’s when I got my first good view of the Vanšu Bridge, as the sun was setting right into the river – wow! 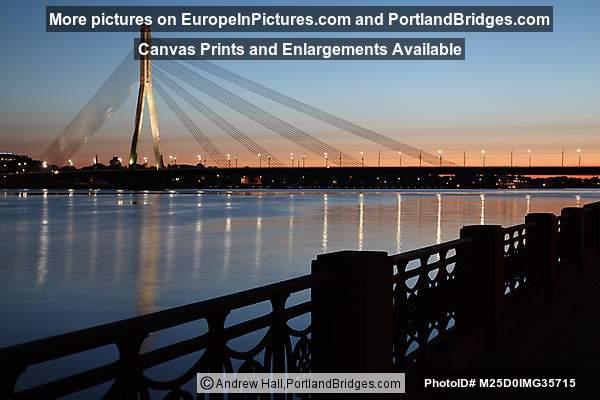 That stopped my heart, and soon I was headed back to the hotel to grab my camera gear. With the long days, I knew dusk would be long so I had enough time to come back and still shoot early night pictures in good light. I wound up spending a few hours shooting pictures of the bridges and various buildings until about midnight – so much for my early night! 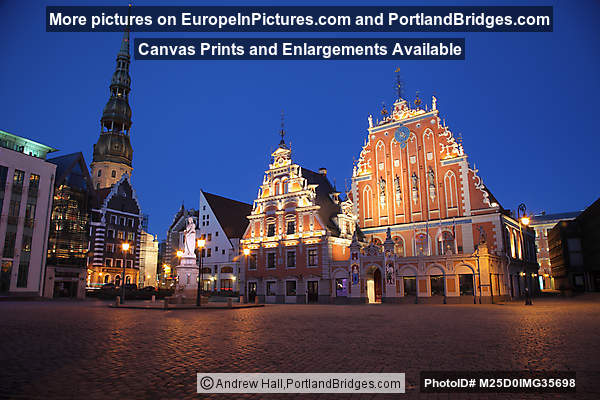 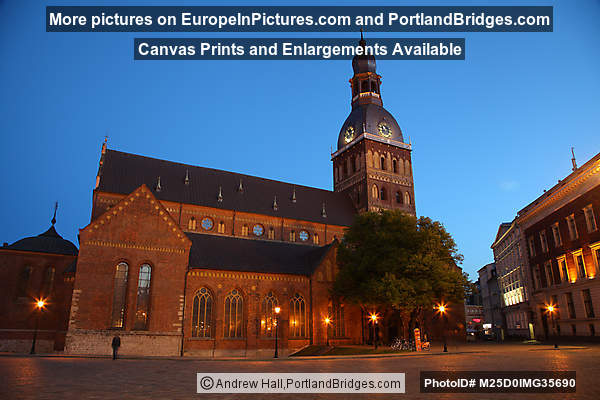 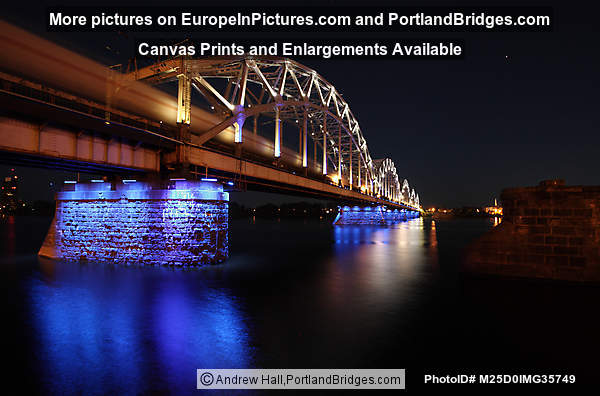 When I finally decided to pack up my camera gear and head back to the hotel – about midnight, somewhere along the river – I would have had at least 20 minute walk back to the hotel, but Google Maps found a tram still running at this hour to save most of the walking! This is another example of where the phone really paid off: I would never have figured out how the bus system that quickly and would otherwise just have walked. As tired as I was, this helped save my feet.

Somehow, after Lithuania, Riga felt like a huge sigh of relief. Not that I hadn’t liked Lithuania, but Riga had an instant appeal to me. It felt like modern city not an “old town” or a drab communist throwback as I’d encountered in Lithuania. Riga was also bigger and more spread out than I had imagined. Away from the old town, it feels like a substantial city with large city blocks on a grid, more like Paris than a small town – much more cosmopolitan than Vilnius for sure. Riga is close to the Baltic Sea but on a wide river with a few interesting bridges across it (most notably, the cable-stayed Vanšu Bridge). The old town and most everything of interest to a tourist is on the east side of the river, but it’s worth walking over the west side for a look across the river if you have time. But I wouldn’t consider Riga a city that embraces its river, exactly.

The old town has a nice vibe to it, even if it was very touristy and not the most authentic feel. There are those huge church spires from St. Peter’s and from the Riga Cathedral. And there is the square with the distinctive House of Blackheads. But there are international chain restaurants like TGI Fridays in the old town as well as many other restaurants catering to English-speaking tourists, so it’s hard to pretend you are going back centuries in time. 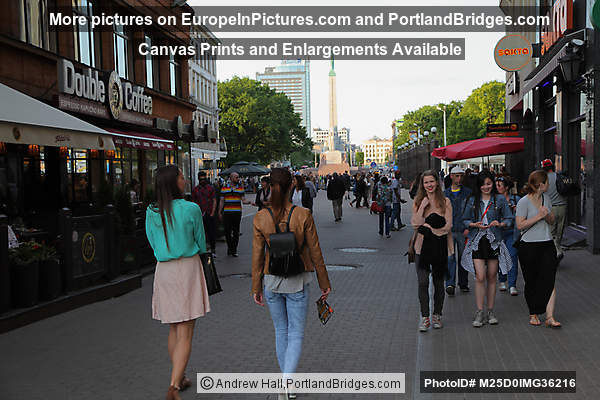 My first morning, I puttered around the old town a little, grabbed a quick lunch, then joined the noon free walking tour, which was great. Our group was about 20 people (after the original large group was split between two different guides) walked from St. Peters down to the central market, into the Russian district, then back to end at the Freedom Monument. 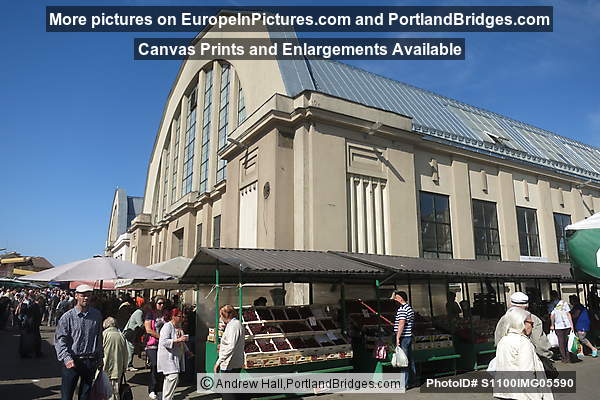 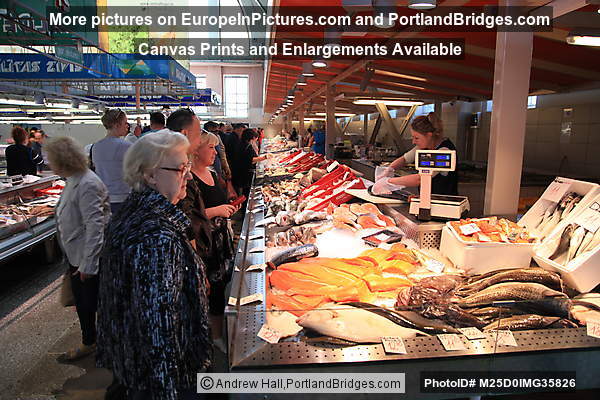 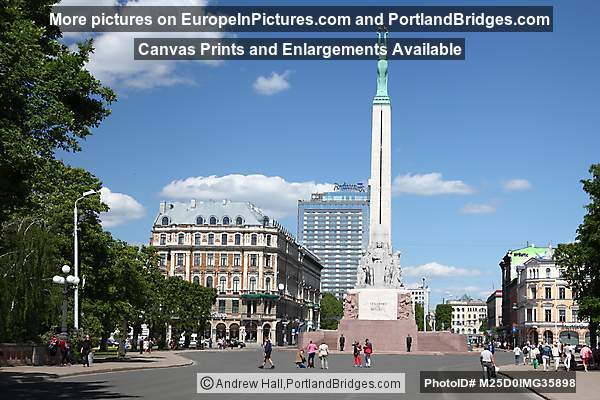 After that, I took a train out to Jūrmala (to the town of Majori), a resort area on the coast, which was about a half hour ride. (See below.) The Latvian trains sure are a lot older than the Lithuanian trains! It was a warm Friday afternoon, and the train was pretty full but I had a seat.

After making it back to the Hotel Edvards in Riga a few hours later, I finally set out to explore the nearby art nouveau district. Wow, those buildings are really cool – but almost creepy! Very intriguing. In case you don’t know what I’m talking about, Riga has a great collection of old art nouveau buildings with weird figures carved on the front, very distinctive. 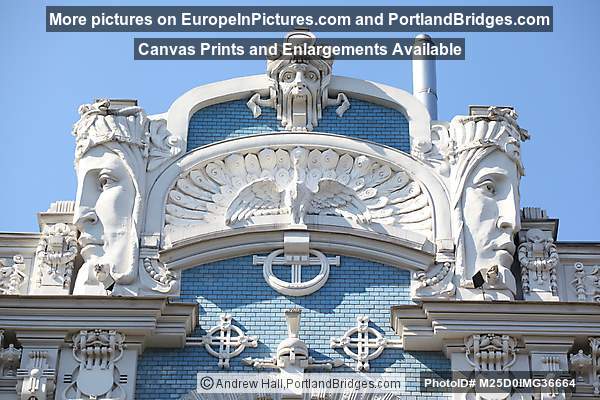 Many (most?) were designed by architect Mikhail Eisenstein, whose son is more famous for being the filmmaker who filmed “Battleship Potemkin” among other films. Anyway, the art nouveau buildings were so amazing that I returned to see them on my final morning in Riga in different light – at least the area was close to my hotel!
I finally took a night off from night photography (after four late nights in a row of shooting). I had a lasagna at a little nondescript Italian place near my hotel.

My final day in Riga was not well planned. I had decided to day trip somewhere out of Riga but could not decide exactly where. I wound up going to Sigulda, a town in Gauja National Park about a 90 minute train ride east of Riga. (See below.)

And so I shot a final night of night photography in Riga, largely from across the river and from the Vanšu Bridge. I didn’t stay out quite as long as the first night. 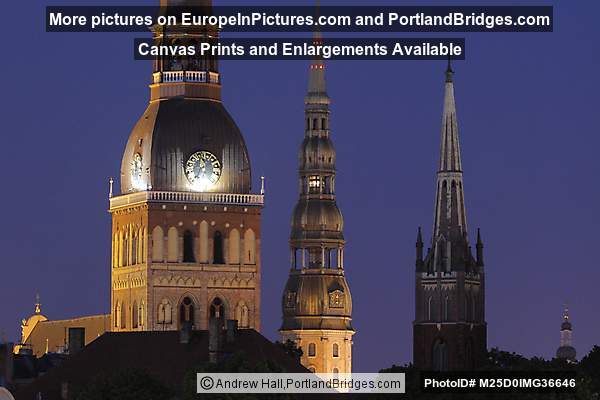 On the walking tour, we’d briefly explored Riga’s huge central market, which includes an amazing collection of meat and fish as well as all kinds of other items, housed largely in several old zeppelin hangers close to the train station. I passed through them again when I had a spare few minutes on the way to the train station to head to Sigulda, but I didn’t get a chance to eat anything from the markets. There are a few places selling food inside, but most of the market is selling unprepared food. One advantage of staying near the market would have been the ability to find a meal here more easily – or if staying at an apartment with a kitchen even preparing a meal from market items.

Riga is also a very “green” city. There are several nice parks throughout the city. On the other side of the river there are public areas for running and recreation as well.