I had some interest in going to Siguda, about 90 minutes by train from Riga, to explore Gauja National Park a little and hike to a few castles, but it didn’t look that interesting or scenic (our walking tour guide had said it was a great place to go in the fall with the leaves turning but otherwise, not so much). There was also the town of Cesis another half hour on from Siguda by train; it was supposedly a nice town, but was it worth two hours on a train each way just to see a town and another castle? 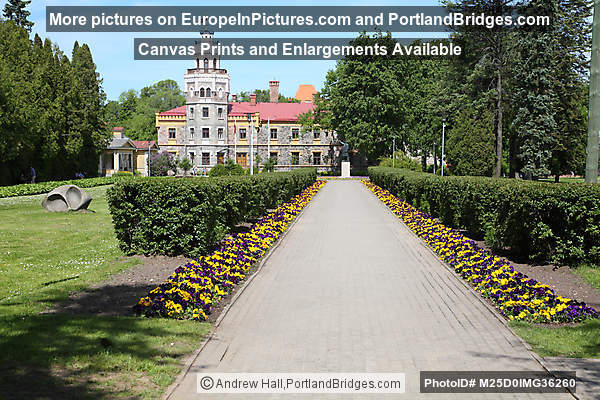 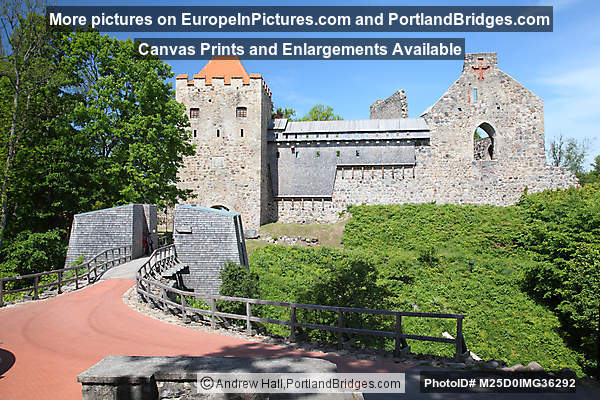 Finally, I compromised: I’d take the train to Siguda for a while, hike a little, then take the train on to Cesis if I felt like it. I had to time this trip carefully, because although there are numerous trains between Riga and Siguda, there are far fewer between Cesis and Riga (there are buses, too, but I wasn’t keen on another long bus ride).

When I got to Siguda (Saturday before noon), there was some sort of weekend festival going on right at the train station, with a band (playing rock tunes, not folk music or anything) and some food booths. 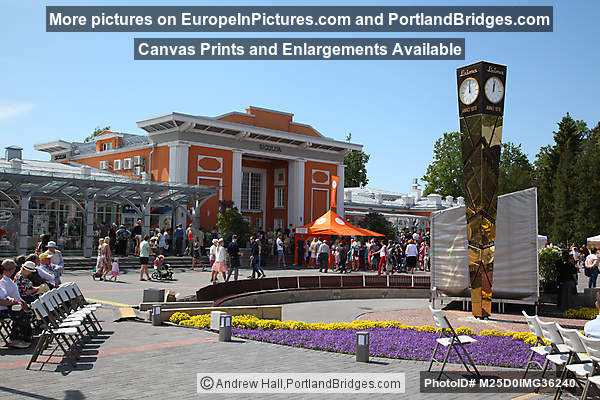 It did not seem like any sort of traditional “Latvian festival,” maybe the kind of weekend festival you’d find in the US. I did find a booth with Italian food there; the people manning it insisted they were real Italians (very friendly people), and their lasagna was really good!

Sigulda is a pleasant town – not amazingly picturesque or anything. The main appeal seems to be that it’s at the edge of Gauja National Park. I walked (not exactly hiked because I was largely on sidewalks along streets) to one of the castles and to a recreation area high above the river. One of the attractions of this “hike” is to take a cable car high over the river valley for the view. But I could see part of the view of the river and didn’t think it was so amazing. So I decided to hike back to the train station and head on to Cēsis.

And this is where I made my first mistake of the trip. Although I’m experienced traveler and have taken many trains in Europe, sometimes I panic in a moment of confusion and do something stupid. In this case, I knew the train to Cēsis was due at 1:35. But I wasn’t paying close attention a few minutes before that, and when I glanced outside, I noticed a train had arrived and people were getting on – oh no, is this my train to Cēsis? MUST BE, it’s almost 1:35!! So I rushed to hop on. By the time I figured out it was actually going the opposite direction, back to Riga, it was too late.

There was no real option to get off at the next stop and catch the next train to Cēsis, because we soon passed the Cēsis train I was supposed to get on, going in the other direction. And the next train to Cēsis wasn’t for hours. Maybe I could have gone back to Sigulda, but what was the point? So…I decided to bag it and just head back to Riga.

It probably wasn’t a bad decision, although I was disappointed to miss Cēsis. I would have had to wait a few hours for the train from Cēsis back to Riga even if I had gotten on the correct train, and that would have gotten me back late to Riga, like closer to 9:30. As it turned out, I used the extra time in Riga to walk across the river and find good viewpoints back on the city for a final round of night shots. I probably would have skipped that entirely had I gone to Cēsis.