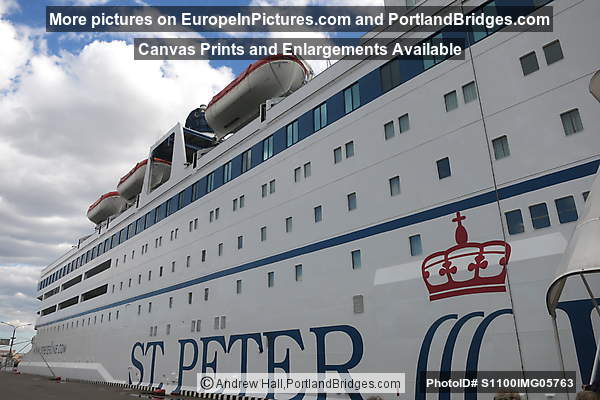 The Eckerö ferry from Tallinn to Helsinki was huge but comfortable (lots of cars and big trucks came with us below decks). I took the elevator up to the top deck, which had a sky bar and some tables and camped out at a table in some shade. (There are small “non-smoking areas that the smokers seemed to relish ignoring.) It was warm in the sun on deck but also extremely windy on deck.

The ride took about 2.5 hours from Tallinn to Helsinki (you get a great final view of Tallinn as you sail away, by the way) and dropped me at the west terminal in Helsinki, which is exactly where I wanted to be, because the St. Peter Line ferry to St. Petersburg departed n a few hours from the same terminal. If you were doing a day trip to Helsinki instead, another ferry line (like Viking) would deposit you close to the touristy Helsinki waterfront instead of far from everything down at the west terminal (but it’s an easy tram ride west terminal there into central Helsinki).

I was able to check in with the St. Peter Line immediately upon arrival from Tallinn, because the St. Peter ferry desk is in the same building as Eckerö – very convenient. I checked in, got my boarding card, etc. and then had about two hours to kill before the 18:00 departure of the Princess Maria ferry to St. Petersburg. (But I needed to be on board by 17:30 and wanted to be on board sooner than that.) There’s almost nothing around west terminal in Helsinki; at the moment, the whole area is a big building zone with construction cranes everywhere. There is a little mall across the street from the ferries with fast food (Subway, Hesburger the “McDonalds of the Baltics”, etc.). I opted to walk a little further to a real McDonalds. There are luggage lockers right in the ferry terminal (where you can leave your bags for a few days if need be e.g. to avoid dragging all your stuff to St. Petersburg if you are coming back). I opted to drag my bags to McDonalds, but I’m used to doing that.

The Princess Maria left more than 30 minutes later than schedule but we wound up arriving at 8:30 the next morning in St. Petersburg right on time. I guess they build in that extra time in case of bad weather or something, but our weather was sunny and perfect.

(I have written a separate trip report just about the ferry experience, including the “visa free” experience and the whole booking process:) 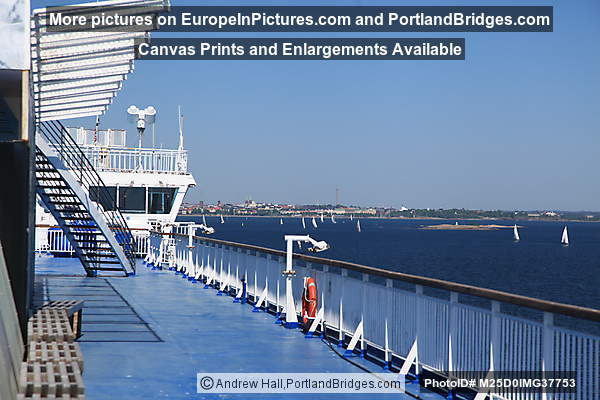 This was my first ferry ride overnight and I was nervous about it – but I loved it. I had a tiny cabin to myself with two small beds and a tiny little bathroom and shower. 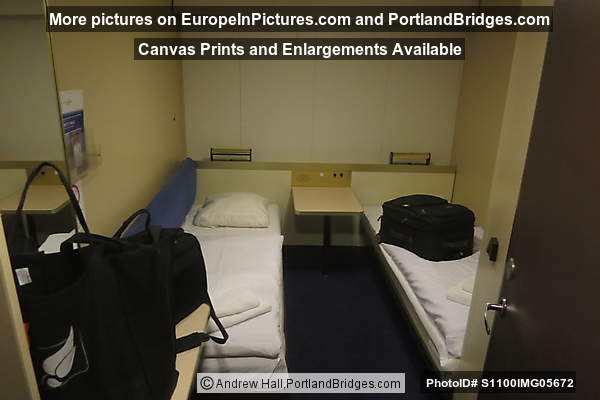 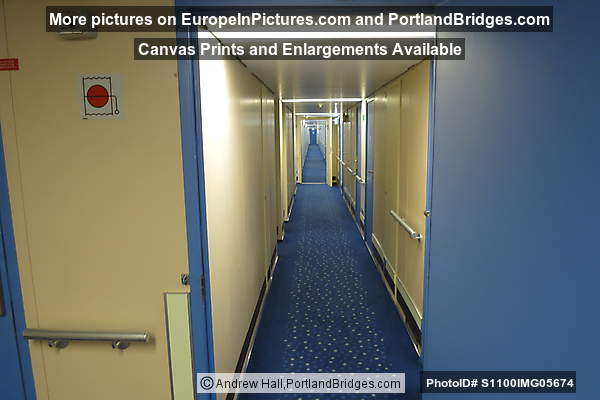 The ferry was huge – eight decks plus a “skybar” above deck eight. 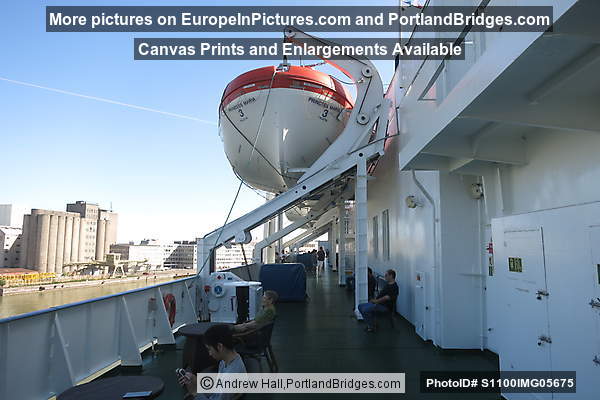 You could walk out on deck eight and enjoy the view (if weather was good) or explore the shops and restaurants below. You can pre-pay for a buffet dinner and/or breakfast when booking the ferry on the St. Peter website, but I opted not to pre-pay for anything. I bought a pizza from the little Italian restaurant on deck seven (next to the sushi place) – only about 8.50 Euro with a can of soda, and the pizza was surprisingly good.

In the ferry terminal in Helsinki, I met an American couple about my age and we had chatted for a few minutes earlier in the day. I saw them again when I got on the ferry, and we wound up running into each other numerous times even in St. Petersburg. Because I was traveling solo, it was nice to have people to talk to for a change!
I did feel a little queasy after a few hours on the ship, even though the sailing was quite smooth and the weather was perfect. That’s when I decided to eat – and the pizza seemed to calm my stomach.

The scenery departing Helsinki was nice but not amazing. Seagulls followed our ship for a few hours. 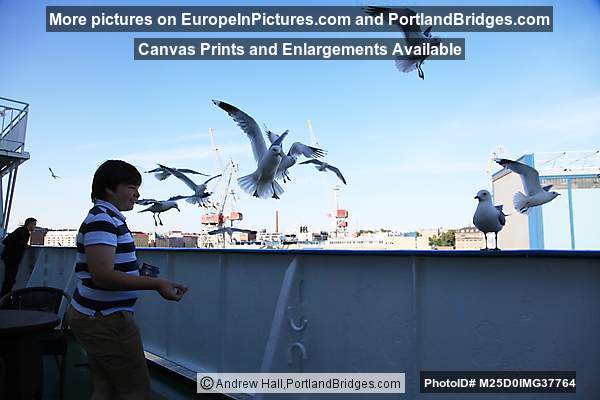 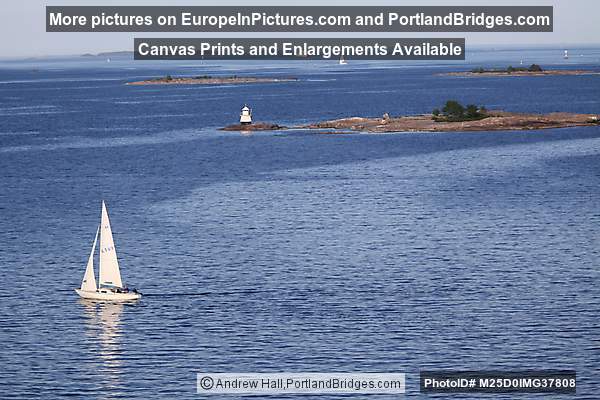 We did have a beautiful sunset. 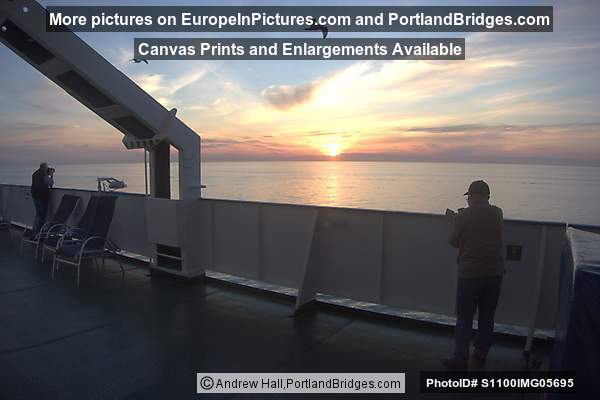 Sunset from Deck of Princess Maria 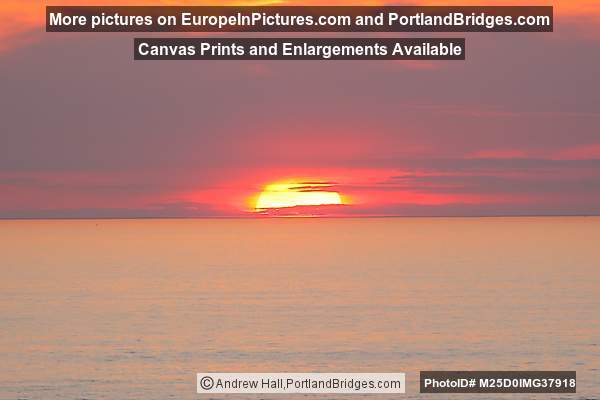 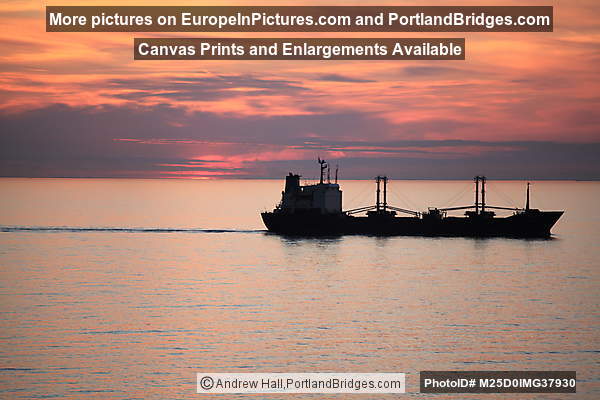 The next morning, I woke up early enough to check out the scenery as we got closer to St. Petersburg – much different than near Finland! Very industrial and urban clutter-ish. Not very pretty. We saw people fishing early in the morning at various spots on the shore or in little boats. 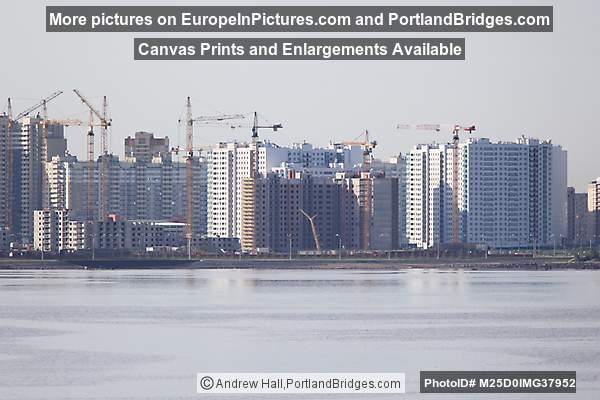 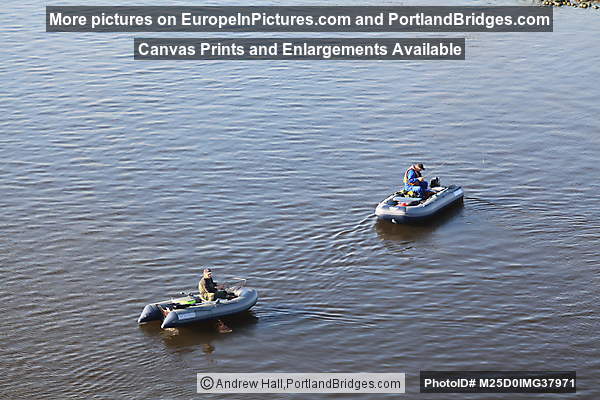 Fisherman in rafts, near St. Petersburg 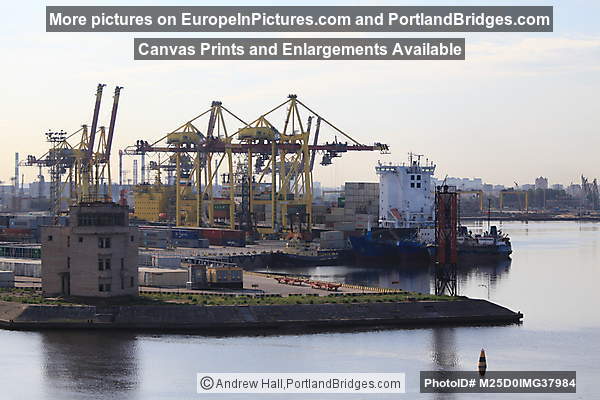 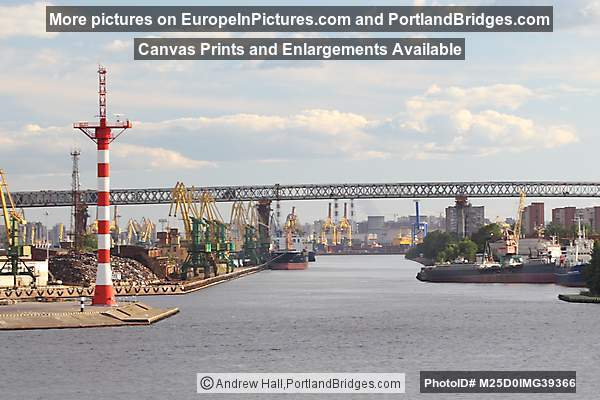 Bridge under construction near St. Petersburg

View More Photos of Ferry between Helsinki and St. Petersburg on PortlandBridges.com