From Amsterdam to Lithuania

I booked a round trip award ticket on Delta Airlines from Portland to Amsterdam (direct flights) with Alaska Airlines miles, then bought separate plane tickets on my own from Amsterdam to Vilnius and then Helsinki back to Amsterdam. The Delta flight was great (empty seat next to me) and on time. We arrived on time, and security at Schiphol Airport has been completely restructured since my last visit in 2015. No more security after passing through immigration!

It was raining like mad outside when we arrived in Amsterdam – was hoping the weather would be nicer in Vilnius. 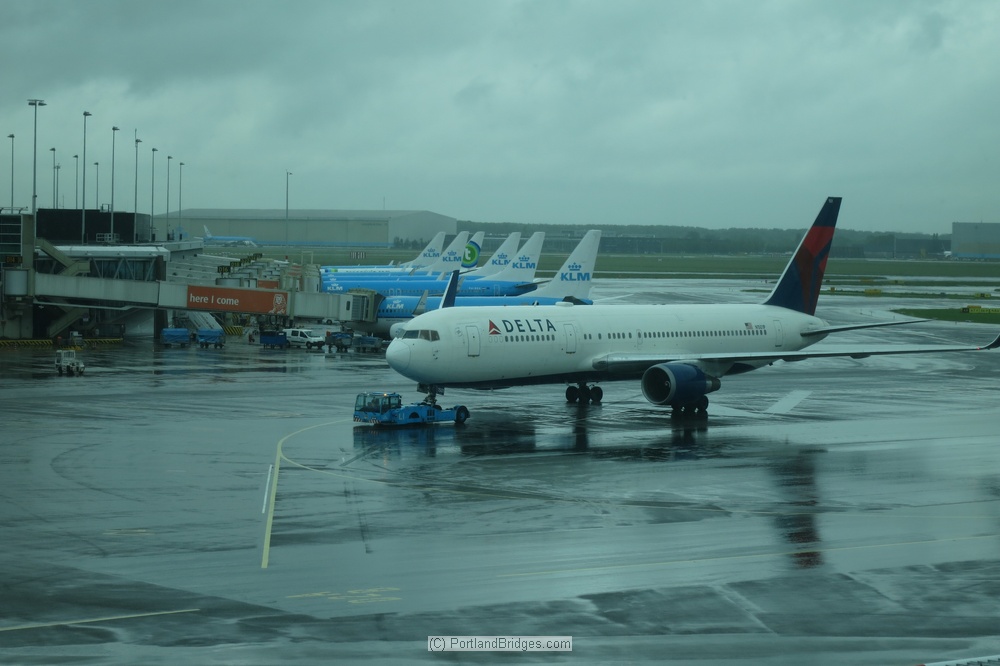 Schiphol Airport, Amsterdam, in the rain

I had about 1:50 to connect in Amsterdam to the airBaltic flight on to Vilnius. Obviously I was slightly nervous ahead of time about making this connection – 1:50 is plenty of time by the standards of Schiphol airport, but any significant delay could have been costly. (I booked airBaltic on my own so if I missed my flight, I’d be on the hook to book another one myself). There was no “next flight” that day at any cost, anyway. My backup plan was staying over that first night in Amsterdam and buying a new ticket from nearby Eindhoven to Vilnius on Wizz Air the next morning. Naturally, the Delta flight arrived on time, but the airBaltic flight (a prop plane) on to Vilnius was at first an hour late but wound up leaving two hours late. Otherwise, the flight was comfortable for a propeller plane.

I got to see the Curonian Spit on Lithuania’s coast from the plane as we passed from the Baltic Sea into Lithuania. Unfortunately, I wouldn’t have time on this trip to explore it from the ground.

Curonian Spit from my plane